There is something that I look forward to every year and that’s when the hunt draw results come out for my family and I. When the results came out, I was in South Africa calling my wife during the middle of the night wondering what we drew. She gave me the news; our 13 year old son got his 1st choice (in my favorite unit), we got our 2nd choice in an OK unit. After getting our family deer hunts in order on the calendar, I decided to schedule one of my work trips to Chile in between my son’s October hunt and our November hunt. I had a friend that was hunting in the same unit as ours in October so I wasn’t really worried about scouting. I knew he would do a good job on finding mature bucks. I concentrated on scouting during the whole month of October for my son’s October hunt, in which he shot a good buck despite his broken wrist. All I could think about during my trip and especially during the 9-1/2 hours flight from Chile to Dallas was looking thru my Swarovski’s and looking for a mature Coues deer buck.

Being jetlagged from the 4 hour time difference, I woke up with no problems at 3:00 am ready to head south to our unit. My wife, Venisa, wasn’t too picky with the size of deer but she wanted at least a 3×3 buck, which is the family rule. After an uneventful morning looking at does, spikes and forks, my wife and I glassed two bedded bucks up at 11:30 am from 612 yards. Since these bucks were bedded in high grass, we really didn’t know how special one of these bucks was in antler configuration. My wife wanted to close the distance to 300 yards but we had to get ready since they were now up and headed away from us. I had to find a place that my wife could lay prone to make the shot. Since the grass was tall where we laid, she had to shoot from the sitting position off her tripod. After a few minutes of looking thru the scope (and me telling her not to shoot the smaller buck), the bigger buck stepped out. My wife held her gun on top of her Jim White tripod head and took this buck at 384 yards with her .270 Win with Leupold 4.5 x14 B/C scope. What an incredible sight it was seeing this buck thru my Swarovski 15’s fall on the spot. What a look on my wife’s face when I told her it was down for good. The last thing she or I wanted was to wound an animal and let it suffer. We both could not stop from shaking in excitement. We hurried up the hill to see the buck. Oh my “LOOK” I shouted! – My wife and I never realized or looked close enough that the buck had another point coming off the bottom of his antler. What a beautiful 1st Coues deer she took on our first morning of hunting together. 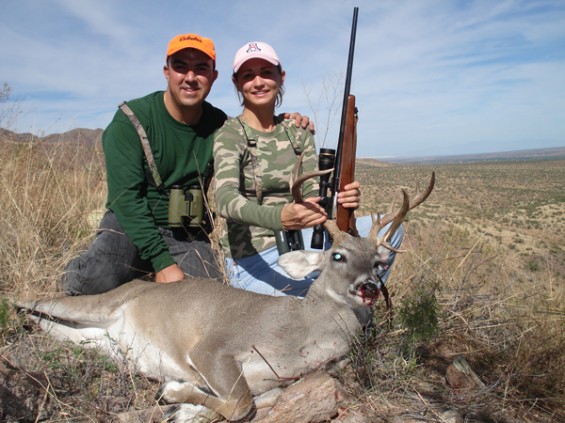 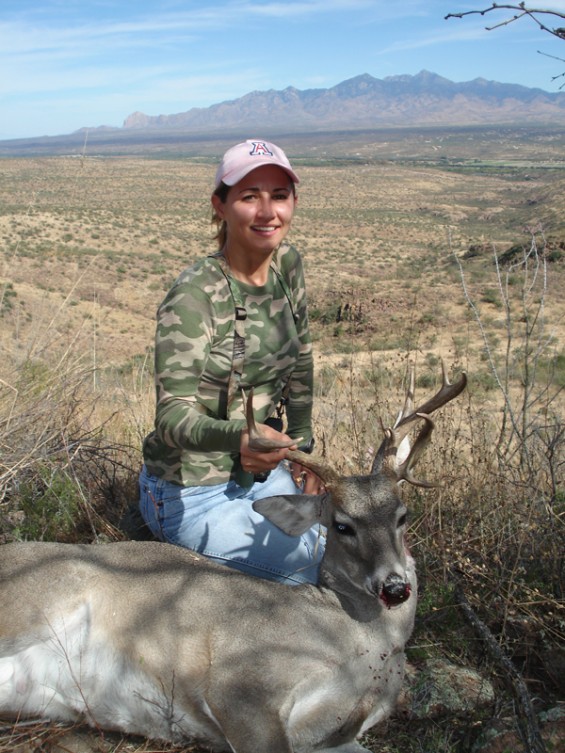