Home / Hunt Stories / Once Upon a Time…

Once Upon a Time…

by Danny Howard (aka Coueselk)

Once upon a time, a dad and his daughter happen to draw the same late whitetail hunt. The dad tells everyone that he will get his daughter a monster of a coues this time. But not just any coues, the 13 year old wants a 4 pointer. Not a big 2 point or large 3 point, but a 4 point. So the story begins……

Numerous scout trips to find that 4 point. Just found these couple of lazy boys under some trees. 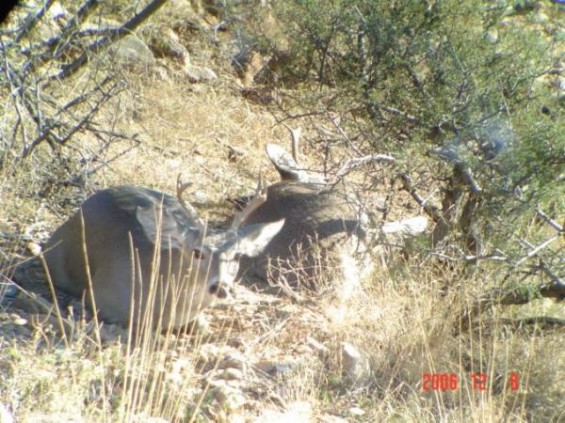 Opening morning December 15th, girl in school, so dad and his friend out hunting together. Find this boy way in the distance. Was a 3×3 that we estimated around 90-95″. Decided to let him pass, since opening morning. 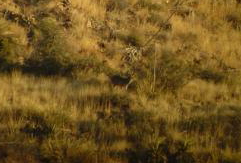 Later that day find these fellas up feeding. Let these boys go as well. 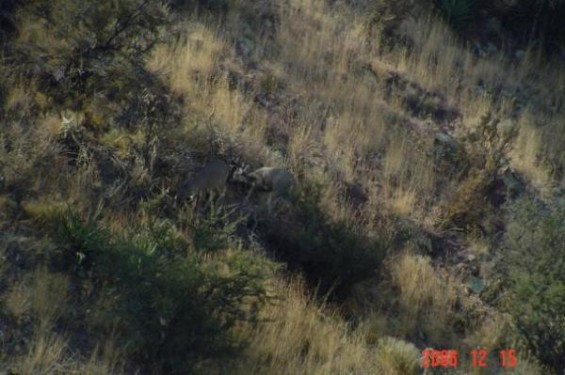 December 16th, out with the kids. Small bucks in the morning and nothing in the afternoon.

December 17th, out with the kids for a real quick morning hunt. Daughter thinks she would like the big 3×3(lost focus on a 4 point), so we look for him. Find him at 8:00am, scraping trees like crazy. 9:00am, stalked to within 348 yards, he is still making scrapes. But as luck would have it, the young boy couldn’t keep still. Buck spots movement and sneaks away. We decide to leave and not push any further.

December 18th, kids back in school, dad and friend head out to a different area. Day was uneventful, lots of does and no bucks.

December 19th, Kids still in school, dad and friend hit new area. Storm moving in with lots and lots of wind. Find this young fella, but nothing else. 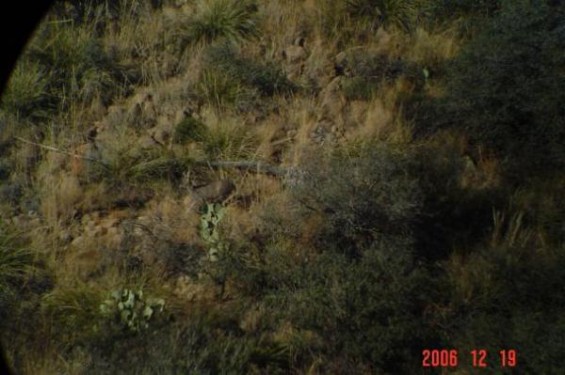 December 20th, kids still in school. Dad goes to morning school program and gets late start. Afternoon arrives and finds a small 2×2 chasing does. 4:30pm, bored, tries to setup to take a picture of the 2×2. While setting up spotting scope, notices 2×2 displaying an irregular head movement. After a closer examination through the spotting scope, notices a large set of forks moving through the trees. A big buck emerges. Throwing all thoughts of his daughter needing a big buck away. He attempts a shot at the buck before light runs out. Misses, buck runs into a ravine and doesn’t come out. Dad attempts to find buck in the thick trees, but only finds a bear emerging from where the buck ran into. Time runs out.

December 21st, kids still in school. Dad goes to look for big buck again, still greedy for himself. See’s another small 2×2 chasing does, see’s two bucks way off in the distance, but looses them in deep cover before can put spotting scope on them. Finds a couple more 2×2’s and 1×2’s. Then finds this fella late in the day. 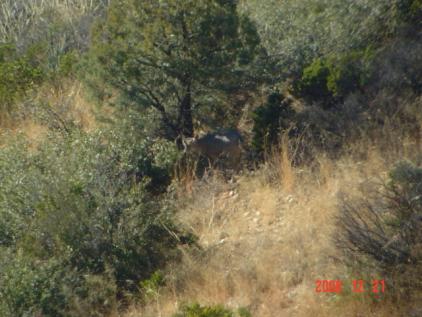 December 22nd, Kids on the hunt again, but Dad doesn’t take them to where big buck is. So, nothing but does did this day give us.

December 23rd, Dad and kids on the hunt. Same as day before, does and does.

December 24th and 25th, no hunting allowed or get into big trouble.

December 26th, Dad takes quick morning hunt by himself to look for big buck again, greediness just can’t be overcome. Still no big buck, finds a small 3×3 chasing does, but big buck doesn’t ever come out.

December 27th and 28th, no hunting allowed, family in town from out-of-state.

December 29th, late start after breakfast, dad goes to try to find big buck one more time, still filled with tons of greediness. Arrives at location and starts glassing. Finds a deer below him, but can’t see a head. Thinks it is a doe, but decides to put spotting scope on it. Stares for a few minutes and see’s a distinctive fork that he had seen a week and a half earlier. Determined not to miss this time, gets a really good solid rest, ranges the buck at 350 yards, puts the crosshairs on it and squeezes the trigger. Buck runs 50 yards and expires. Dad is happy for himself, but now sad at the greediness in not bringing the kids along and allowing the daughter to make an attempt. 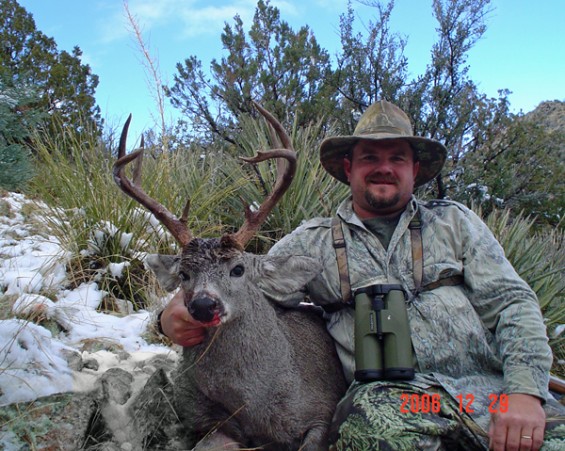 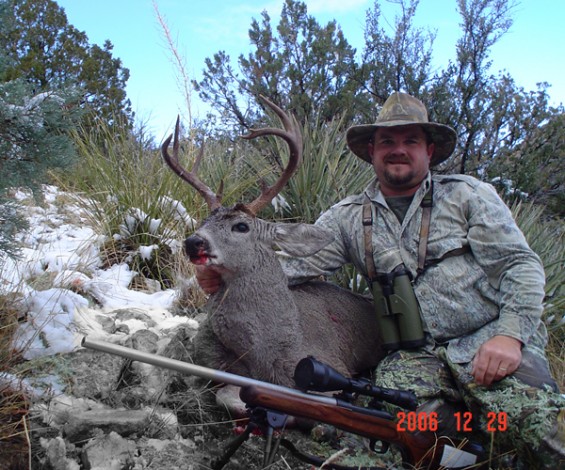 December 30th, kids on the hunt. Really windy and cold this morning, go to area to find the big 3 point that snuck out on us earlier in hunt. Locate does and more does. Really, really windy. Kids want to go back to truck because they are really cold. Call friend on radio to let him know we are leaving. He tells of small buck across from us. We locate and daughter says yes to trying to get it. (Cold sunk in and she wanted to get it over with) We get to within 40 yards of buck, but no shot. Wind swirling really bad and buck runs off. Rest of day, small forky off of road(now that warmed up, doesn’t want a small one) have to pass.

Last Day, finally take kids to where big buck was, before greedy Dad shot it. Cousin goes with us. Locate a monster 2×2 in the morning. Watch buck for almost two hours, but buck wouldn’t bed. Finally had to come to reality that the buck was truly too far away for the youth to go after.

Around noon, locate the fella that took pictures of on the 21st. Just a 100 yards from where he was at on the 21st. Sneak down to with-in 208 yards. Buck is bedded now and don’t have a clear shot. Attempt to grunt to get him to stand up. Nothing. Cousin varmit calls from mountain top. Nothing. Cousin and son rolling half the boulders down off of the mountain top. Nothing. This goes on for an hour and a half. Finally, when we just about to give up. Up he stands. Daughter is shaking like crazy and says, quote “Dad, he is soo biggg”. Dad tells her not to look at the head, but concentrate on the body. Tells her to put the crosshairs on the shoulder and shoot whenever she was ready. She shoots. The .22-250 Nosler Partition drops the buck in his tracks. We hear screaming from the mountain top, she is jumping up and down because she got it with one shot. (Last few years have been a couple of shots.) 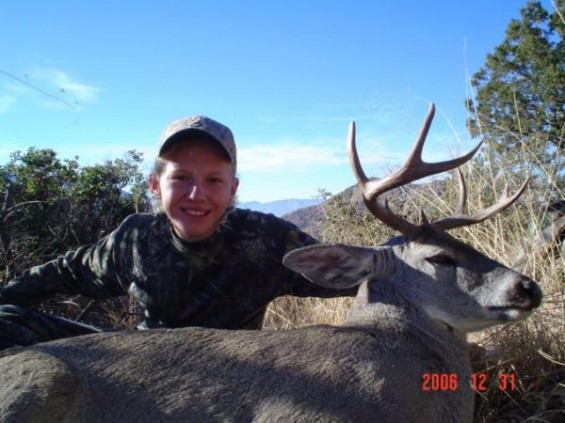 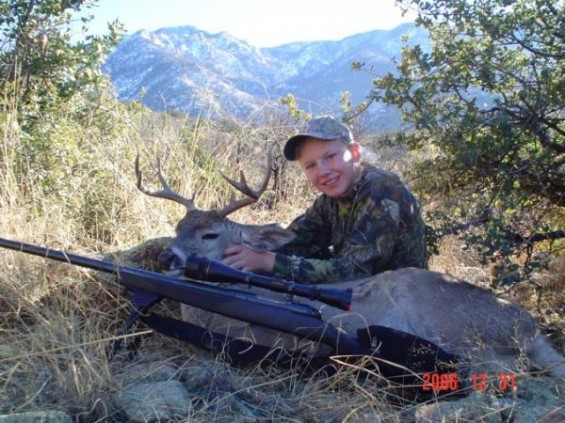 She is extremely happy, it’s not the 4 point, but it is her biggest 3×3. She now has 4 coues bucks under her belt in as many years. Someday when the Dad isn’t as greedy with the big ones, she may get her shot.