We got into our glassing spot before light and started glassing intently as soon as it got light. The morning was perfect with about an inch of fresh snow and the fog had lifted. Thinking there was going to be whitetails everywhere, but weren’t seeing anything. Until finally at 9:00am my partner spotted these bucks on the north side of a narly canyon. We set up the spotting scopes and decided to go after them. We lightened up the packs grabbed the radios and took off. It took us about 30 minutes to get to the point in which we figured we could shoot from. When we peeked over we found the bucks up feeding still and ranged them at 600 yds. too far to shoot. We then decided the only way to get in range was going to be to backtrack and get on the same side as them and hope to be able to see them. We backtracked back around and got above them by this time they had bedded. We radioed our spotter on the point and he said we were right above them we glassed and glassed, at 11:00 my partner picked one out below us bedded at 150YDS straight down. We decided I would shoot at the bedded buck and he would try to get the other one as he busted out. He moved to get a better angle and spotted the other buck bedded. So I settled in and could only see his neck through an opening, but at 150 yds no problem. I rested the crosshairs on him held my breath and squeezed. BOOM!!!, It didn’t sound like the familiar sound of a hit but nothing even flinched. My buddy then shoots at the other one BOOM!!!, nothing again. I decided I missed and am going to shoot again I settled in and BOOM!!! Thawck he rolls over in his bed. The other one finally stands up and BOOM!!! Thawck. two bucks down. This really proved to me how tight these bucks will hold. With a .300 Win Mag and a .300 Rem. Ultra Mag going off 150 yds from them and they didn’t even blink an eye. This was definitely a once in a lifetime hunt and it was awesome. We have three other tags to fill so we still get plenty of hunting in this season. This has also been a truly blessed year with a nice coues buck and earlier in September I killed a 350 bull with my bow after waiting 8 years to get a tag. Good luck to all and shoot straight. 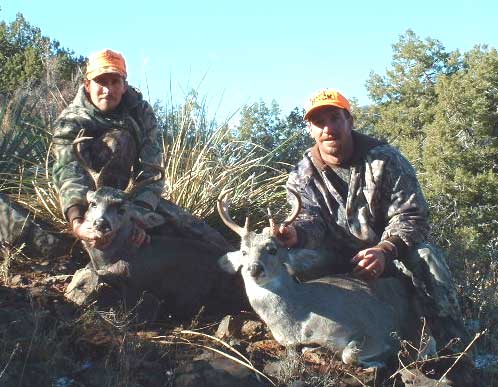