I woke at 1:30 am and was out and on the road by 2:00 am. I was first headed to pick up my friend Andrew out in the hills. After we got to the blind the waiting began. We had lots of wildlife come in every half an hour. At about 6:00 am we had some coyotes come in and Andrew shot and missed. Then a nice big jack rabbit came in and Andrew redeamed himself and got the jack. Then it happened at 9:30 on the dot we spotted 2 deer comming in to get a drink the first was a nice 2 point buck. The buck stopped right in front of the blind at 18 yards Andrew wanted to shoot so he drew back and guess what happened? He jumped the string. Andrew was soo disapointed he wanted to. I talked to him for awhile and calmed him down and said there will be more. At 10:00 a doe came in and we saw a nice looking buck behind her. But the buck did not want to come in. We watched with anticipation as the buck walked behind some brush and just stood there. After about 15 minutes we thought he had left and to our amazement he was still there we were excited so much we had forgot to keep looking around. As I slowly turned to look at Andrew I saw legs out his window and my first thought was, it was the Doe. As I lowered my head more and more to see his head THERE HE STOOD. The buck I was after was right there. All I could think was please let me get a shot. His tine length took my breath away. I slowly moved to position to take the shot and he acted like he was going to bolt. I drew my BOWTECH back (he was at 21 yards) and put the pin right behind his shoulder and realeased. Now that arrow seemed so fast that it looked like it went right in behind his shoulder but to my amazement that little booger jumped my string and it went in right behind his ribs and out right behind his other leg. WAHOO I had just shot my first archery and biggest buck yet at a perfect quartering away shot. He had only went 60 to 75 yards and expired. He has an extra kicker on his left G2 and his bladed eyeguards were 1 1/2 thick. This is what dreams are made of and if you think you can’t do it you can. Thanks for reading. 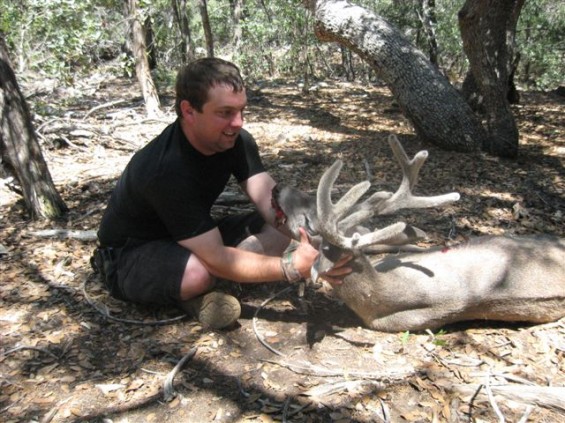 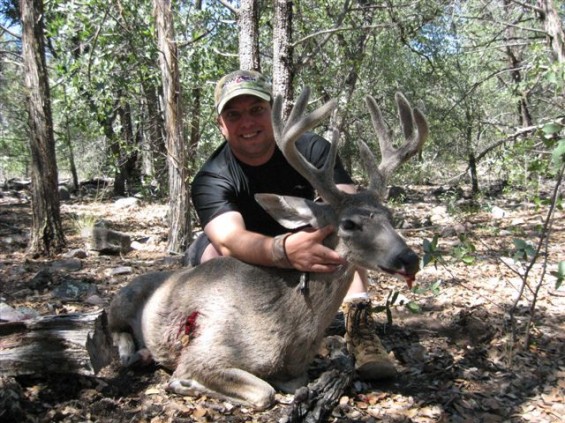