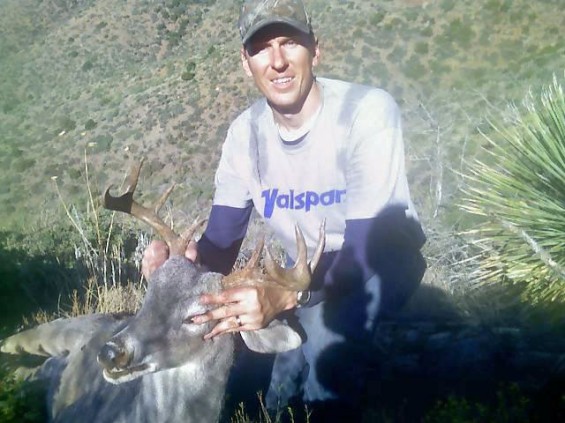 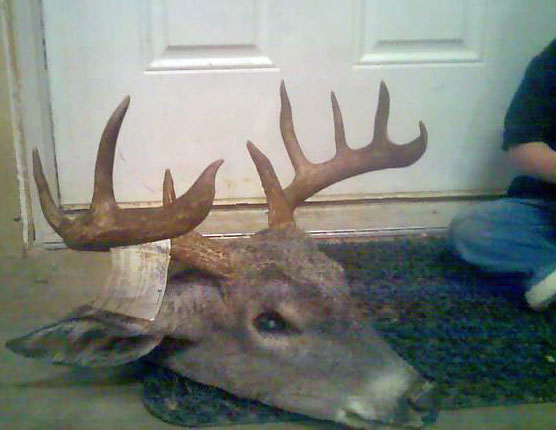 I shot this buck opening morning in Unit 23 of this year. My 63 year old father glassed this buck at about 1000 yards at first light. He was with another buck, and they were sparring with each other as we came up with the best stalking strategy. It was so far and so early, it was hard to tell just how big these bucks were, but it was apparent they were good bucks. My two boys and I decided to hike around the back side of the ridge where the bucks were. My father is not able to hike much anymore and kept an eye on the deer and kept us up to date by radio. The bucks were on a ridge that was about 800 foot higher than we were at the time. The trip around the ridge was even farther than we thought. We went our of radio range, so we just kept moving hoping that the bucks would still be there. As we came back over the ridge, we came back into radio range, and my Dad said the deer had starting moving to where we were planning on coming over the ridge. He said they must have heard us, and moved the opposite direction, he said they weren’t spooked, just moved further up along the ridge.

One of my sons was very anxious, and got out ahead of me, he went pretty low on the ridge because the walking was easier. As I tried to slow him down, my father directed me to the spot where he last saw the deer. My other son and I had to climb up the ridge a little farther to hopefully get a better angle on the deer in the next draw. As we topped out over to see the next draw, one of my sons was about 200 yards lower on the ridge than we were. As with Coues, the terrain was very, very steep. We quietly worked our way over and began glassing for the bucks. I then heard a shot from my son down the ridge. I looked that direction and saw a deer top out over the next ridge. Just then, I saw this buck step out and look toward my son. I hoped that he would see him, and I tried to get my other son at my side to see the deer, but nothing. I had the deer in the cross hairs, waiting and wanting for one of them to shoot. He began to move over the ridge so I squeezed the trigger. He dropped immediately at about 100 yards.

We then noticed the other buck moving two ridges over, about 250 yards away. I got my son to quickly set up on him, but when he pulled the trigger, nothing. He put another shell in, and the same thing, nothing. The gun dry fired twice – what a shame! From what I saw of the buck before he went out of sight, he may have been bigger than the one I dropped.

That buck had jumped out so close to my son, that he could not find the deer in his scope – he still had his scope on 9 power after seeing the bucks so far away. He finally took a shot because the deer was so close, even though he couldn’t see it in the scope. He must have missed.

He was the first to this buck and yelled across the draw that it was huge. I knew it was nice, but it all happened so fast it was hard to know just how big he was.

He scores right at 103 inches before deductions. His inside spread is 15 7/8″, and is very heavy. He is a nice buck and it was the start of a very fun hunt.

My son Austin shot this other 3 point buck at 250 yards with a 22-250, he knocked him down and my other son Jon finished him off with a shot to the head at 800 yards with a 25-06 and a Carl Zeiss turret scope that my brother let him use.