by Eric Shipp (aka Noworries) 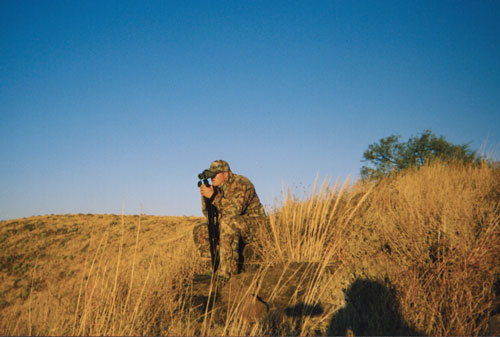 Eric glassing on his hunt.

The Thursday before opening morning saw the three of us backpacking into some of the gnarliest hills in the area. Thanks to Bullwidgeon (Bret M.) we saved an hour on the trip by taking a different road in. He really helped us out and for that we are extremely grateful. He was sporting a CouesWhitetail.com hat and is a great ambassador to the site. The sad part is that the five hour hike still only put us about 1.25 miles from the crowds. After a rough night’s sleep filled with sore muscles, excitement, and anticipation our October Coues hunt began.

The long hike quickly paid off with my dad (Dennis Shipp) glassing, and then taking a beautiful 92″ buck. The shot was taken about 100 yards from our bedrolls. Since the ridge the buck was down on was wicked steep we caped and boned the buck out before packing it back up the hill towards camp. We glassed a small buck Friday night but no shooters. After a 3 hour hike out of the hills on Saturday a trip in to town for some warm food (pizza), cold beer, and a shower was just what we needed. Sunday morning found us hunting the foothills of the same mountain range my dad had scored on. After glassing some does and fawns, both Mule deer & Coues, we spotted two coyotes. We decided to try to call in the coyotes with a varmint call. The call sent the coyotes packing. It also kicked up some does that were in the thick stuff a canyon away. We watched the does hi tail it out of there and then my uncle picked up two bucks lagging a couple hundred yards behind them. Since is was my uncles spot he had first option but decided that they were out of his range. My dad and I had practiced shooting that far before so I knew what the 7mm Ultramag would do. I decided to set up and take the shot. With the Ultramag on the tripod it was time for the deep breath and squeeze. I hit the bigger buck on the first shot and he only went about 20 yards before bedding down. One more shot from closer range put him down. I’ll update with the score after taxidermy but we are guessing him at around 85″. The triple eye guards on the right side make him really unique. After 15 years (8 tags) and multiple missed opportunities this is not only my first whitetail but my first deer as a whole. I would like to add a special thanks to my uncle, Steven Shipp, for helping me out. I’m sure you can tell by the long, long story that I am now as hooked on Coues hunting as anyone could be. 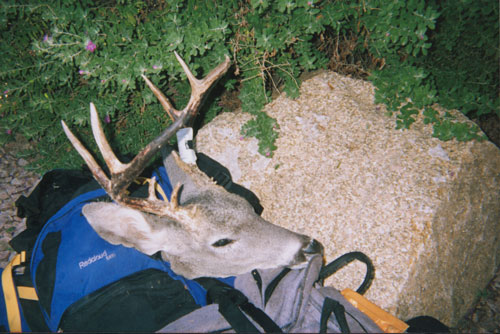 This photo shows the “triple eyeguard” Eric mentions in his story. 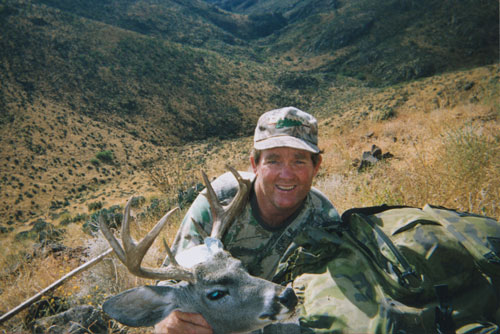 Dennis Shipp and his buck. 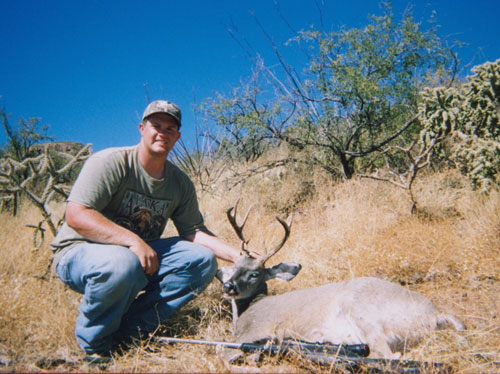 Eric Shipp with his buck. On the buck’s right antler, he has a sort of triple eyeguard. One looks like a shadow on Eric’s wrist and the other two points are above that.