Pat is from New Mexico and here is what Pat had to say about his hunt:

“This is a pic of a deer i just got in arizona, he’s not big, but any Coues with a bow in my book is a trophy. This was a last minute decision on where to go, we had not scouted this area at all. Me and my buddy went in this area on December 15th, found a scrape line and set a tree stand. I sat this stand on the 16th, and had 5 mulie bucks come within 70 yrds and had 1 coues spike come in right under my tree, then I saw a nice 80 class coues about 150 yrds. After all the activity I decided to do some rattling. I started my sequence and put my horns up and looked and here was this buck, he was so aggressive, he won me over. I had time to decide on whether to shoot him, but I knew I could come back in January, so I stuck him. He expired about 50 yrds and 5 seconds later. I have a coues tag for January in new mexico, then in Arizona again. I hope to fulfill a dream of 3 coues in two months.” 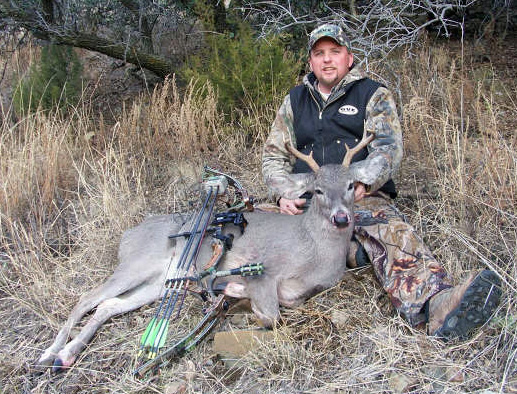