Recipe for a Coues’ Deer Hunt

Blend ingredients together and add 1 gallon of Luck . Walk your fanny off until the ingredients are smooth and opportunity smiles on you. Pull the trigger, choke on the smoke, and be confident that your aim was true.

2003 was my first time to hunt in Arizona. After almost 40 yrs. of separation from my brother ( Ron Higgins), we were going to hunt together in January during the archery season for Desert Mulies. This hunt was mainly about the reunion and togetherness with my brother so I didn’t really know what to expect from the area. After 3 days of hunting I had decided that if I had my rifle, the back end of my pick up could have looked like a porcupine with antlers sticking up everywhere from all of the big bucks I had seen. However for me, walking around with a sharp pointy stick in this vastness, trying to poke a deer with it was not my forte. Instead, I was getting poked by every species of Cactus in the area and I was not cunning enough to get close enough for a shot.

I was hooked after seeing the quality of animals in the Desert. I needed to find another way to approach this type of hunting. My brother suggested a possible muzzleloader hunt. You can extend your shooting distance but you still only have one shot. Yep, but I know that I can reload my bow faster than a front stuffer if I needed to. Sounded like an option to consider.

Ron had also told me of another species of deer in the area called “Coues’ Deer”. It is also known as the Grey Ghost and is the smallest species of Whitetail in the U.S. Ah – Ha I thought, two separate species available to hunt at the same time. We were at the transition point where the Desert Mulies and Coues’ Deer overlapped.

We applied for the 2003 muzzleloader hunt and were fortunate to be drawn. Since I had seen the terrain, I felt that a new inline rifle would be more appropriate for this hunt and my ole Hawkins would have to stay home this time. My weapon of choice would be a new Knight Disc Elite in .50 caliber.

The November hunt was exciting. The weather was really warm and windy, yet I was still able to pass up on over 20 bucks trying to find one of those big boys I had seen previously in January. I had read much about the little Coues’ Deer and knew that most of them would only weigh between 80 to 100 lbs. with all of their stuffings in em. Antlers?? Well they too are mostly on the smallish side.

Three days into the hunt, I spotted my first Mulie in it’s bed about 300 yds. across a wide shallow draw. My brother glassed the animal and said “no, it’s a Coues’ buck”. He was correct and I was now looking at my first little Whitetail. Only thing was, his antlers stretched beyond his ear tips and were quite tall for the species. Ron stayed in his glassing position while I made my trek to rendezvous with this miniature deer. At approximately 40 yards, the buck jumped to his feet and slowly lopped through the cactus on his way to the top. Shouldering the gun, and finding the quarry in the scope, I pulled the trigger when the cross hairs centered behind the front shoulders, and all that I heard was a heart breaking “CLICK”. My brother watched the entire episode and questioned me as to why I hadn’t shot. I didn’t have an explanation. I tried to repeat the performance of the gun at camp and it shot flawlessly every time.

Two days later as Ron stood beside me, the gun repeated it’s performance as I pulled the trigger on a 3 point Mulie. I was fit to be tied. I merely raised the bolt and recocked the firing pin again. About 15 minutes later, I squeezed the trigger on a small Mulie and Ron said that it looked like the buck had been struck with a sledge hammer. It never knew what hit him.

My experience in 2003 only fueled my desire to hunt the small ghosts again. When 2005 arrived, Ron and I again applied for a muzzleloader deer tag. Luck smiled on us once again as my Arizona deer tag arrived in the mail. With the arrival of the tag, visions from the past hunts were rekindled in my mind. The night mares of the gun not firing as expected with a trophy in my sights were also quite vivid. That was an experience you don’t want to encounter again I can assure you.

After finding and repairing a small defect in my rifle and shooting in excess of 100 rounds in preparation of the hunt, my confidence was renewed. With high expectations and a shot of adrenalin, I was again leaving my home town of Red Bluff, Calif. and headed to Tucson to meet my brother.

Opening morning found me pouring 120 grs. of Triple 7 powder down the muzzle and sliding a 250gr. Shock Wave bullet on top of the charge. The air was crisp, clean and it felt like a buck hunting morning to me. Ron found a nice Coues’ buck to shoot at but was unsuccessful on this attempt today. After the regular rifle season closing a mere 4 days previous to our hunt, the animals were quite skiddish.

On the 6th day of hunting, I still had the same load in my gun that I had loaded opening morning and we had walked close to 30 miles trying to locate a shootable buck. My brother had put a small Coues’ deer buck to rest this morning and between us, we had now seen a total of 16 bucks. Two things I had found out, #1) I had found a buck pasture, which was on a flat piece of real estate that was fairly choked with Mesquite Trees and probably encompassed 300 acres. Without exception, every time I entered this area, I jumped bucks. #2) These small ghosts were giving me an education. I never did see one that would stop running and look back at me. Usually it was only a glimpse of the antlers, the flag, and the part of a deer that would be the final part to clear a fence.

As evening approached, the buck pasture was all I could think of. Ron was all smiles as his tag was already filled and he was content. I was content too with the idea that I was going to invite him to dog the Mesquite thickets for me. I hoped this would work because tomorrow morning would be my last opportunity to hunt and then it would be the exhausting drive back to Northern Calif. We formulated a flawless hunt plan where I would sit on a jutting point overlooking the Mesquite choked flat. Well, there was a fly in the ointment and a buck ran past me, dodging brush and cactus before I got to my sitting spot. No chance for a shot. The plan wasn’t sooooo flawless after all. Darn, well let’s make another plan. We entered the flat side by side with the breeze in our face. Within seconds after we separated to push the brush, a white flag erupted and vanished directly behind some Mesquite trees from me. Then a second flag. The second flag made a mistake and dashed to his left through a small open path. With his ears laid back, the antlers looked exceptionally wide. He was approximately 70 yds. from me and running almost directly away at lightning speed. There may have been 20 yds. of opening he had to clear before he was safe to run another day. As I shot, the smoke filled the air and I quickly bent down to look around the cloud just in time to see my buck vanish behind a tree. I looked at Ron and shrugged my shoulders. I received his shocked look in return. Everything had happened so fast. As I reloaded, I knew the shot felt good. Upon finding his fleeing tracks, I surveyed the area for blood. The tracks were deep in the desert soil but no blood was found. I continued on the tracks in order to ascertain his direction, while knowing that a wounded animal does not always leave a blood trail. As I rounded the tree in which he had disappeared from me, there he lay. What an animal!! His live weight was 130 lbs., 5 points on each side, with an 18 1/4 inch spread.

After the 60 day drying period, he will go in the Longhunter record book as # 3 typical and would rank as # 2 in the non-typical category. He was also scored by SCI at 114 1/8ths. 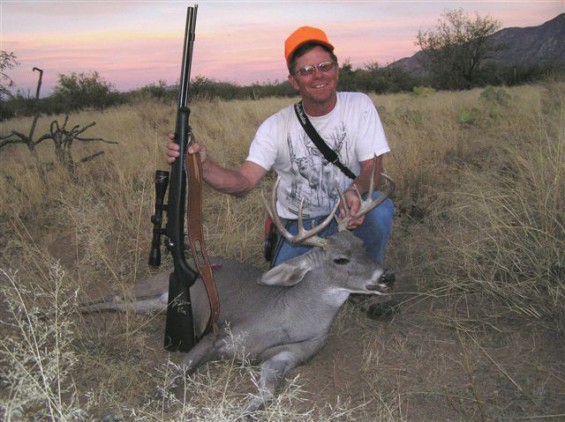 Scott with his fine buck. 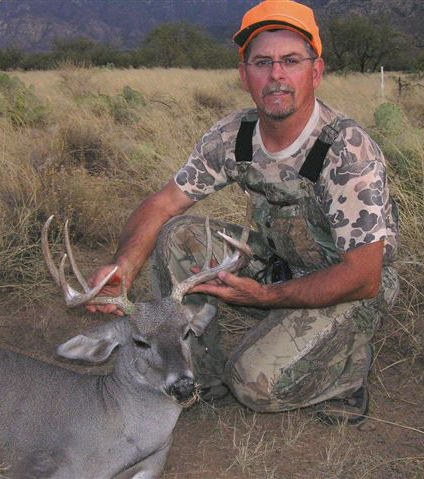 PIC – Scott with his fine buck.