May 11, 2012 by CouesWhitetail in Hunt Stories with 0 Comments

It was that time of year again, when all the waiting would come to an end. Finally, I could find out if I was drawn for anything. As soon as I found out that I could check on the internet, I immediately phoned my dad. I was driving home to Globe from Phoenix when my dad called me back. “Son, you are never going to believe what I am going to tell you.” Well after not being drawn for elk or antelope for 6 years, I was hoping that those two words would be in his next sentence. “You got drawn for deer.” All right, I have been waiting for an Arizona coues deer permit for a couple of years now. Then he told me I got drawn for elk and antelope too. He was right, I didn’t believe him, I had to go and check for myself. I had drawn an archery bull elk tag and a rifle antelope tag. Wow, this year was going to be great. My only downside to my elk and antelope hunts would be that I am a full time student at Northern Arizona University and I would be limited to only hunting the weekends. My antelope hunt starts the second weekend of my elk hunt, so I would only have one weekend to hunt elk.

My elk hunt was first in line this year and it was a hunt I will never forget. I saw lots of good bulls every time I was able to go out and I was also able to get within bow range. The only bad part was none of them ever offered me a good shot opportunity. Due too all the great elk we were seeing during my hunt, I didn’t have an opportunity to scout for antelope. The plan was to head up to my antelope hunt and shoot the first good buck we saw and then return to hunt elk.

At first light, on opening mourning of my antelope hunt, I found myself looking at over forty antelope. Two of them were nice bucks. One of the bucks was heart shaped and looked to have had 15” prongs. I have always wanted a heart-shaped buck and this was my chance. At 375 yards, my 130-grain Hornady bullet found its mark. My dad Jesus, and our good friend and hunting partner, David Johnson immediately took care of my trophy and we headed back up to hunt elk again.

The next day was the last day I could hunt elk and I got into a decent six point raking a tree. Again, no shot offered. Although I didn’t harvest a bull elk with my bow, I sure learned a lot about this magnificent animal and had a great time hunting them.

It was now December and both my school year and hunting year were coming to an end. I still had the late season coues whitetail permit for one of my favorite units in eastern Arizona.

“Coues Whitetail,” Say No More! These deer are awesome! Small, beautiful, and smart. They have the ability to disappear from a hunter’s eye in a heartbeat. If you have ever chased them, then you know exactly what I am talking about. They may be the hardest of all deer to get. To harvest a record book coues deer, takes a lot of knowledge about the animal and patience. What I mean by patience is being able to pass up 80 and 90” class bucks. Maybe even a low scoring 100-class buck.

On the first day of my hunt, I was accompanied by our family friend and hunting partner, David Johnson. Both of us had deer permits, but I was going to hold out for a nice one. David’s not picky, if its got horns, it’s going down.

At first light, we began walking into a small draw were we have always seen bucks. The wind was really blowing hard, so we decided to sit under some brush to escape the wind and glass comfortably. After glassing all the terrain we could see, I decided to glass the hill closest to us again. Out of nowhere, standing next to a mesquite tree in the tall grass, was a great buck. He would probably score over 100 B&C points. By the time I lowered my binoculars to show David, the buck was gone. I told David that this buck looked really good and might be the one I was looking for.

I stood up to grab my gear before going after the buck and caught a glimpse of three deer running below us. They were all bucks. They had been bedded right below us the whole time. David grabbed his gun and made a beautiful running shot on one of the three 80 class bucks. I quickly went up the next ridge to see if I could find the big one I had just seen a few minutes ago. With no luck, I went back to David’s deer and we dressed it out and carried it back to the truck. His deer was a pretty little palmated 3 point.

The next morning it was snowing and the fog prevented visibility until about 10:00 a.m. My brother, Mark and I returned to the area hoping to find the big buck. We saw a few does and four bucks. One buck was really heavy, but didn’t have the points I was looking for. It was really difficult to pass up this great deer, but I had two weeks of the hunt left and the rut hadn’t even begun yet. I knew if I was patient I would find what I was looking for.

The next day my brother had to work, so I called up my good friend and hunting buddy, Jay Boyer. He love’s coues deer hunting, and quickly took me up my offer. I decided we would hunt a bigger mountain range near the deer I had been seeing. As Jay and I headed up the mountain early that mourning, I saw up some does below us on the opposite ridgeline. I watched them for about ten minutes, hoping a buck was with them. With no luck, we kept climbing up the mountain. When we got to the top of the snow-covered hill, we cautiously peeked over the other side. I immediately saw some does bedded down on the ridgeline below us. I decided to keep walking around the backside of the mountain. I kept a close eye on the does, hoping a buck would show up. On the third glance back at the does, I couldn’t believe my eyes.

Out of no where, a huge set of antlers stuck out of the brush near the does. I quickly sat down and folded out my Harris bipod on my .270, knowing this was the buck I had been waiting for. I had the buck in my crosshairs when Jay told me he was only 198 yards away. The buck was facing us and he had some does in front of him. I didn’t have a good shot yet. All of the sudden, the buck just disappeared. I could see all the does, but he was gone. I knew the buck had to be just lying there also, but where? I couldn’t see him anywhere. I was just going to have to wait until they all got up and he presented himself.

Jay and I sat in the snow for three hours before the does got up and started feeding up the ridge. During that time I must have said a thousand prayers, asking God above for just another look at this beautiful animal and to not freeze to death in the process. When the does got to the top of the ridge and were out of sight, I had no other choice but to go after them. I told my buddy Jay to stay there and keep an eye out as I headed toward the deer. When I got to the top of the ridge, I saw the does just below me about 60 yards. One of the does saw me and they took off running over the hill. I quickly ran after them. When I got to where they had crossed over the ridge I saw them running up the next hillside. The buck wasn’t with them. Huh? Well, this buck didn’t get this big from being stupid I thought. Maybe he was still lying down in the thick brush behind me. I turned around and started glassing through the area I had just ran through. Wow! My prayers were answered when I saw an outline of a deer in the middle of a big juniper tree. His antlers were up in the branches and his whole entire body was completely surrounded. I couldn’t believe I had walked within a step of the buck when I was running after the does. He didn’t even move a muscle. Smart coues deer for you. I quickly sat down and placed my crosshairs on his back. The only opening through the branches was about two or three inches wide. I figured at a distance of 80 yards my .270 should have no problem getting the job done. My shot was perfect and the buck died in his bed.

When I walked up to him, I couldn’t believe how big he was. A true 4×4 coues whitetail with 6-inch eye guards too. Wow! My buddy Jay quickly came down off the hill after hearing my shot. “Did you get him?” he said. I just pointed below me in the middle of the giant juniper tree. He couldn’t believe his eyes. Both of us sat there and just admired my trophy. We were amazed that I had walked within a step of this buck and how he crawled up underneath such a place to hide. I sat there for a minute and thanked God for giving me the opportunity to harvest such an amazing animal. He was everything I waited for and more. 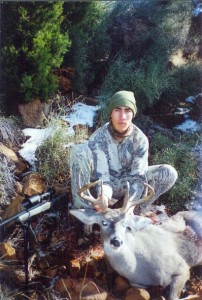 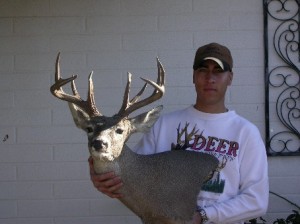