“After 14 days of non stop hunting and freezing my rear end off… I made it happen!

Yesterday I relocated my stand due to frustration and lack of seeing any deer or recent sign. It all started this morning when I left the house to go get into my treestand. It was the windiest day I had experienced so far. I was climbing up pondering to myself, boy this is going to be fun. The wind howled and gusted up to 20mph all morning. It wasn’t 40 minutes later, when I could hear branches cracking that I decided to get out of there. It was still way too early in the morning to call it a day, so I decided to take a walk and see if I could do some “spot and stalk”. After walking 400 yards or so, nature called and I had to take care of business. Upon zipping up and getting ready to continue on, I noticed a buck trotting more or less in my direction. I kneeled down 5 steps later and waited assuming that he would continue in the same direction. After what seemed like way too long to see the buck I decided to stand up and see more. All the sudden, there he was trotting again in the same direction (more or less broadside) and he had no intentions of stopping. I went to full draw and grunted at him, which stopped him at 15yds. That’s when the ol’ stick n string did the rest! I waited 45 min. and then took up the trail. After 60-70 yds the tracking job was done and my tag was filled. This is my first Coues deer, and he is a true trophy to me!” 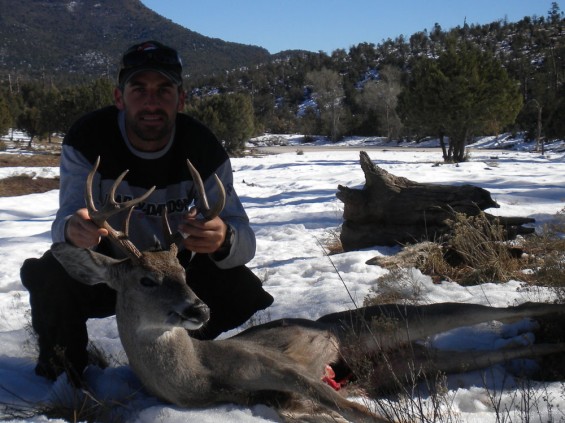 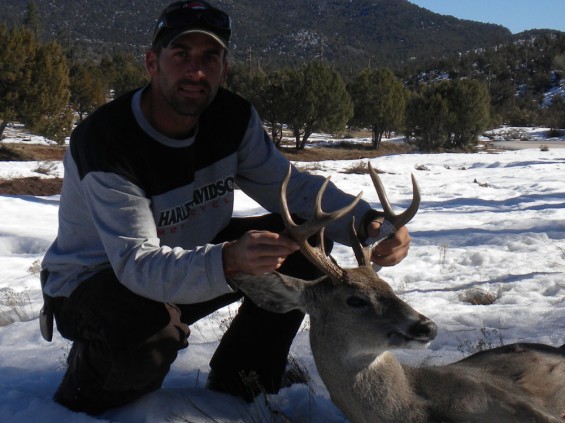