by Ryan Feringa (aka azryan)
(originally posted in the forum)

Day 1:
I had a bunch of people up helping opening morning… Christian came up Wed night to help me out through the weekend…My buddy Brandon also came up and then my dad and two of his buddies also were up there to enjoy the outdoors. We get up before sunrise get out to our glassing point in the dark and we waited for that great moment waiting for it to get light enough to glass. Christian and Brandon went to one spot while my dad and I headed to another spot to glass. No later then thirty minutes in, Christian drove over and said they had a buck located. S o we headed over there to take a look. The buck was a decent forky that would score around 50″. I decided to pass him up, but it was hard to do so, especially with Christian and Brandon urging me to shoot it, but I did not give into the peer pressure very easily, later on this decision paid off. We ended up glassing a bunch of does, which was basically the story of this whole trip. Lots of deer but the wrong gender. After we decided to stop glassing at the one spot, we decided to go for a hike to get into some good glassing territory, that turned up nothing. The rest of the day was spent hiking our butts off in some very nasty stuff, and glassing. 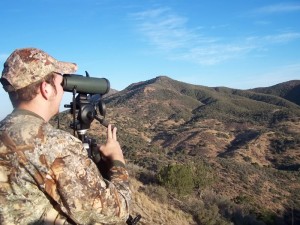 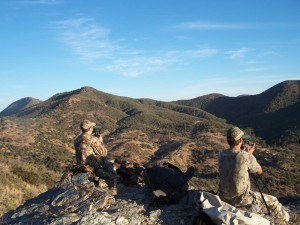 We kept glassing from the same spot hoping to turn up more bucks, but it never worked out like we wanted to. We were already tired from all the hiking we did the day before and we decided to call it an early morning. Christian got some really bad allergies and was miserbale so he headed out Sat afternoon and Brandon had left Friday night. My dad had to take his buddies back into town. So it was just my dad and I the rest of the weekend. That afternoon I went down into some lower elevations to glass a hillside where I had seen some bucks scouting. I caught some movement behind a tree not far up the hill, and saw it was three coues feeding around at 2pm. I narrowed it down to two of them being does and one spike. I was debating whether or not to shoot that spike. I decided to pass him up as well. The rest of the evening I only turned up four muley does. As it got dark I started to become a little discouraged after two days of hunting. Not finding any bucks and just does.

Day 3:
We were back in the same area where we had seen that forky. I was hoping to find him and try and shoot him, but we could not find him. We only found more does. After glassing some more areas and turning up more deer of the wrong gender I decided to go home that afternoon and recharge my body. Four days out there was enough for me. So I left discouraged about how opening weekend went. 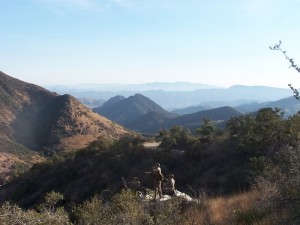 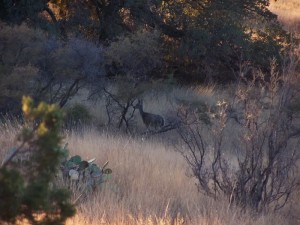 Day 4:
Brandon and I headed out into a different part of the unit to some areas that predominatley held mule deer, but there were always a few whitetail hanging around. That morning we glassed and glassed only turning up 5 mulies. I knew we were taking a chance hunting these lower areas due to all the mulies in it, but its always worth trying. That afternoon we hit a different area and hiked to the highest peak we could find to glass. When we got up to the top we setup our glassing perch and started picking apart the hills. After a little bit of that we both passed out and took a little snoozer. I love glassing and taking naps in the process. It is refreshing. After our eyes were refreshed we found a herd of piggies right below us. Brandon then says he has a buck bedded right below us, So my heart starts racing, but he di not mention whether it was a coues or muley,ended up being a little forky muley. Then we finally found some whitetail way up on a far mountain side. We put the spotting scope up and it turned out to be three does. Just our luck!. After all the glassing we have done the whole hunt we only turned up two bucks. the rest of the evening we glassed up two more whitetail, a doe and fawn. At the end of the day I started to regret not shooting that forky. But I was still determined on finding a good buck. I knew all this work would benefit us in the end.

I slept in and got a really late start. My buddy Cody or aka Napolian had the next couple days off so he came up to help me out. We headed into am area that had been burned years ago that held some whitetail. We got out there just as the light was fading and had about twenty minutes to glass, we only turned up one doe.That night we made a call to Brandon and he was going to come up in the morning.

We waited for Brandon to show up then we packed our gear and headed out to look behind more glass. after awhile of nothing, Brandon says he has a deer, the problem was it was at least a mile and a half up hill in the next mountain range. We confirmed it was a buck, and we headed out after him. We knew it was going to be a very very low chance of finding him again. Well after an hour and a half of hiking some rough country we made it up to a hill that was across from where we saw the buck. We set everything up and started to pick the hillside apart. we had a really good idea of where he bedded but it was to thick to even see in. Then all of a sudden Cody yells “Buck, Buck, Buck” the two deer were 200 yards below us. But Cody jumped to conclusions and they ended up being does. He states that he does not like these little deer, but deep down inside he has a passion for them He only wants to shoot mulies. So after he got all our blood going we were dissapointed again. Brandon had class that afternoon and had to leave. So Cody and I went to another spot that turned out to be money. We get up to our glassing point and start looking, after a little nap here and there I spotted two deer, but confirmed them as more does. It was frustrating seeing all these does. About twenty minutes later it was about 4:45, Cody yells “Big Buck”, sure enough he glassed up a really good buck with the El’s, we were thinking in the 80-90″ range feeding at the top of a little mesa. This deer was a long long ways up at the top. He was pretty much in sheep country. He was located at the top of some sheer cliffs. There was only one way up to him. I decided quickly which route I was going to take to close the distance. My plan was to end up right on top of him.

This image does not do justice of how steep this country was. Below the deer was a sheer drop off at least 200 ft. The image does not show it well at all 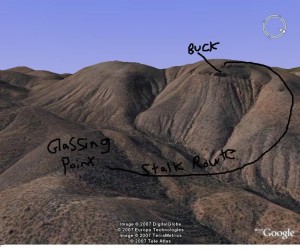 I knew I had to go quick because I had a little less then an hour of shooting light. So I went up these steep steep hills as fast as I could. I have never been on hills that steep for that distance. I knew I was crazy going up this stuff, and at one point I almost gave up, I did not physically think my body could do it. It seemed impossible to make it up in time. But I kept going because my adrenaline was going. I ended up to the top in about 30 mins, which I was amazed at. I finally got to the top and started looking for him below me, I had about 15 mins of shooting light left, and I started to worry that he was gone some I look back to where I left Cody and the 15’s, I look back at him through the El’s and could hardly see him but I saw his arm pointing right. So I slowly worked my way to the right, but nothing. I then looked at him again and saw his arms come out. I interpreted it as he is gone…start heading down, but he really meant “what the hell are you doing”….I turned around no more then fifty yards up from me was the buck. I turned the safety off and let the led fly. I missed him the first shot, then he started running, my second to last shot hit him, then I let another one go and it dropped him. I was shaking alot, I was so excited yelling at the top of my lungs. I could hear Cody yelling ” You got Him”…it was a great experience. When I first put my hands on him I was so relieved and the feeling that it was over was awesome. This buck was my first, and My friends and I worked our butts off for him. We did not get back to the truck till 5 hours later packing that little guy out of the hills.

Sorry I do not have any field pics, because I did not have my camera with me. Christian came up with a gross score of 84 3/8″…not bad for my first

I would like to thank everyone that helped on this hunt, especially Brandon, Cody, and Christian. They helped me out so much, they busted their butts for me when they did not have to. I shot Cody’s .300 short mag, the same gun he dropped his Kiabab buck with. 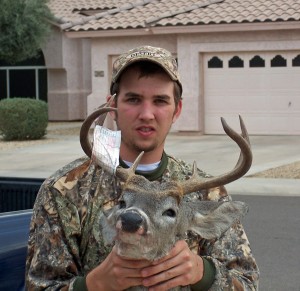 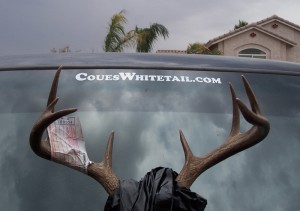