Here is what Jared said about their hunt:

We only had 4 days to hunt. We hunted way south of the border (7 hours driving straight through) and the ranches we were on were very very thick. It was hard to find places to glass from as the brush was taller than us in most places. It was also hard to find a deer in a clearing. On top of it all it was very overcast and raining all week.

The first pic (the one with the broken main beams) is Terry with his buck. This buck was shot at 50 yds and due to how close he was and the magnification of the binos we all thought he was bigger than he is. He scores 92 inches as is and about 98 inches if you credit his main beams.

the 2nd pic (the one with the rifle) is Jared with his buck. It was my first time in mexico and I was holding out for 100 inch class buck, but we weren’t seeing any and when I spotted this buck about a mile away i thought I would get closer and see if I could relocate him in the thickness and get a shot. Terry came with me to help and we got to a clear place where I could get in a prone position and get a good rest and as luck would have it we relocated the buck. It was thursday at noon and so after looking him over for about 2 minutes( he was headed back for the thick brush) i decided to shoot him. I shot him at 517 yards. He scores 90 inches and is my biggest coues.

The third buck (the one with the fog) This is Ron’s buck. It was Ron’s first coues deer hunt. He held out until friday morning and shot his buck in the fog at 75 yds as it was chasing a doe. His buck scores 91 inches and he was thrilled. He definetly is hooked on coues now.

Great memories, tough hunting (what coues deer hunt isn’t?) and we got some more experience. 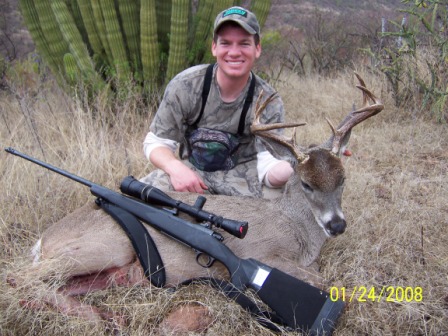 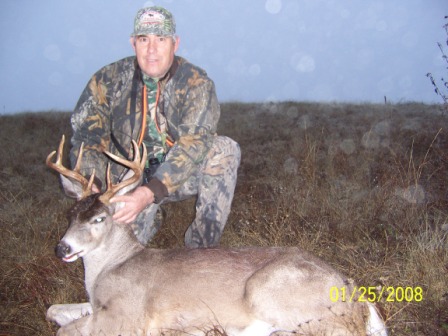 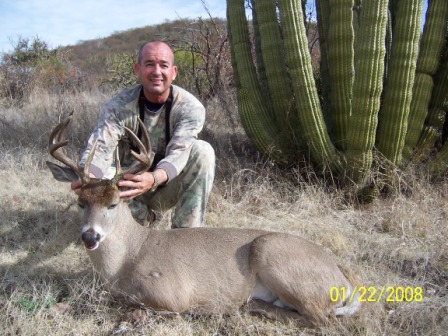