This hunt actually started in March of 2005 when my father first took me into a new area to see what I thought of the country. I instantly fell in love with the area and knew that it would produce some quality bucks, so my dad and I made plans that had us spending all of our free time scouting and hunting starting that August. On one of my many trips I spotted a very nice high racked buck that I though might be a 90-95 inch class buck. I drew a Nov. rifle tag for the area and during that hunt I spotted the high-racked buck once again and figured him to be at least 95 and probably closer to 100 inches. I could not go after him where he was on that occasion but later in the season I hunted him hard and ended up blowing a stalk that sent him high tailing it out of the country not to be seen again the rest of the year.

During the December/January archery season a very good friend got me started on trail cameras by loaning me some of his and teaching me how to use them. I passed up a lot of bucks with my bow waiting for the buck that I had messed up on by not being patient during the rifle hunt but he never showed up. Dreams of the next season set in and the scouting began with me putting the cameras out and making the almost 8 hour round trip every other weekend. Over time I got pictures of a lot of deer and some good bucks, but not the high-racked buck. Finally in Late August and again in early September I found him in the same basin as he was in the year before.

After endless trips of checking the trail cameras and glassing the hillsides the November rifle hunt crept up on me. My father and one of our hunting partners set up camp the weekend before season and we all met up on the Thursday before the opener. The three of us hunted hard for the first couple of days with very little seen all though my dad did jump a very good buck but wasn’t able to get a shot off. On Sunday two of our other hunting partners came into camp to share the joy and agony of chasing the grey ghost with us. That evening I headed out to the basin and I spotted the high-racked buck. I watched him in his bed until the sun was lost behind the mountains but was unable to make a stalk so I walked back to the quad and headed for camp. Once back in camp I found out one of our party would be leaving due to family obligations so that would leave Jim, Keith, Dad, and myself to pursue “High Rack”.

Daylight found us set up and scouring the hillsides with the best optics money can buy (thanks to Jim and Keith) but we could not find the buck.

I saw a flash of a deer where the buck was the day before and I felt confident that it would be High Rack so a stalk was planned. Keith and I made several attempts to close the distance but with other deer in the area and the wind direction we had to back out every time so we eased off of the ridge and headed back down to where Jim and Dad were set up watching our antics. After comparing notes, collectively we had only seen two small bucks all day so we packed up our gear and headed to the trucks. By the time we got there the sun was down and we were able to glass back to where the small bucks had been earlier in the day and it didn’t take long for Jim and Keith to find them. Looking through my binos I noticed another deer feeding a little ways away from the two bucks and immediately recognized it as the buck we had been looking for; it didn’t take long for the light to turn into darkness but not before everyone got to see High Rack and quickly field judge him in the 100-110 inch range. It was a long sleepless night that finally ended and Jim and I were soon climbing the ridge that Keith and I had been on the day before. Dad and Keith took the trucks back to where they were the previous day to set up and try and locate the buck once again. Jim and I got to the top just as the day began to break and the wind began to howl. After getting set up and a quick radio check with the guys down below we started picking the hillside apart directly across from us in hopes of finding the buck where he had been when we left him. To my surprise I quickly spotted High Rack and shouted/whispered to Jim his location. He was standing right on the edge of some very thick cover so I wasted no time in getting a solid rest for the 300 ultra mag short action and ranged him at 404 yards. As soon as Jim said he had him firmly in his binos I squeezed the trigger and the buck dropped. After a quick hug I started across the canyon with Jim staying put to walk me in to the downed buck. Keith made his way up to me to help with the pack down and handle the pictures and Dad worked the quad as close as he could.

I am very pleased with “High Rack” and he ended up scoring 109 5/8″ gross. Not only was this hunt a success for getting this buck but it was a success for having my father and two very good friends with me and all being together, not to mention I couldn’t have done it without their help; thanks guys! I also have to thank my wife and daughters for allowing me to spend so much time in the field. 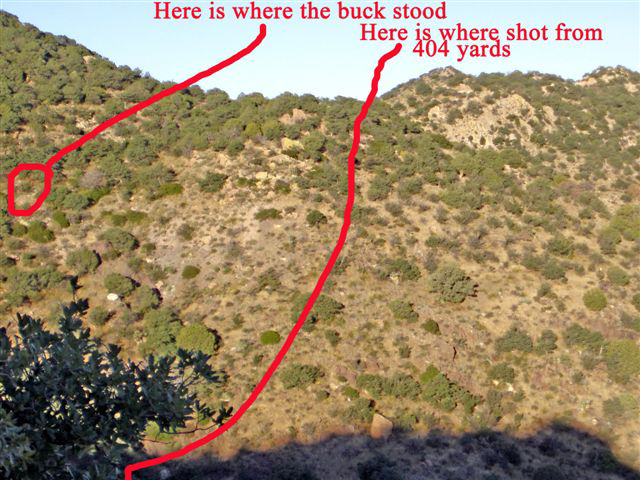 This photo shows where the buck was and where Phil shot from. 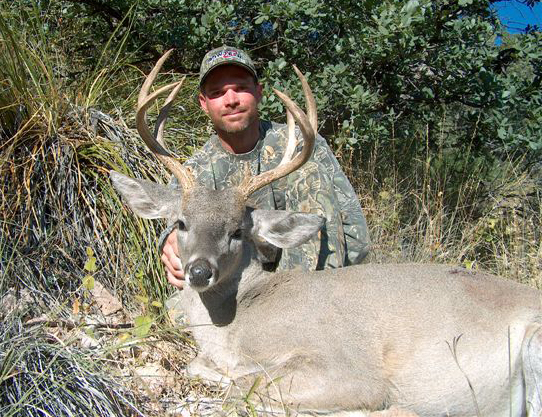 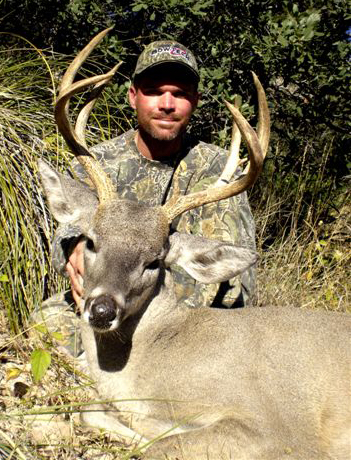