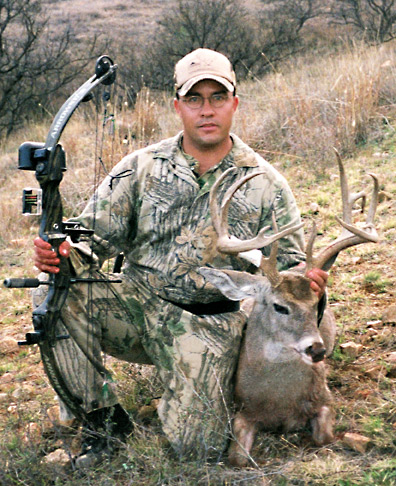 For Sergio Orozco, the balmy August day mirrored many of the days he had spent hunting deer since he had taken up bowhunting in 1991. The 30-yr.-old fireman had driven from his Nogales, Ariz. home to the southern part of unit 34A and had arrived well before sunup. After hiking to the top of a ridge, he set up his tripod and binoculars, then began glassing the rolling hills and ridges in search of a decent Coues deer buck – Arizona’s diminutive version of the whitetail. Several hours of searching turned up only a couple small bucks and several does, however. As the temperature approached the triple-digits typical of a summer day in the desert, Orozco started back to his truck.

“I decided to fill my canteen, rest a bit and regroup for a late afternoon hunt. I had walked along a cow path for less than 10 minutes when a buck jumped up. He had been bedded under a bushy mesquite tree that was less than 30 yards off the trail. He ran down and across a small canyon, and all I could see was his huge, velvet-covered antlers as he disappeared over the far ridge. I knew he was big. After I filled my canteen, I went back to the area where I last saw him, but I couldn’t find him again,” Orozco said.

Over the next few weeks of the 2000 early archery season, Orozco returned to the canyon many times. “I hunted that area hard for the rest of the season and never found him again. Then I scouted every weekend, even after the bow season ended in September and while the rifle seasons were going on,” he said.

“October went by. November passed. Finally, on the weekend before the December archery hunt began, I found him feeding in a small clearing in the middle of a bunch of mesquite trees. He had moved a bit farther north from the first place I had seen him. Even though the velvet was gone by now, the height of his antlers and a distinct drop tine convinced me it was the same deer. Naturally, I was thankful a gun hunter hadn’t already killed him.”

“I spent at least 12 days chasing him during the December archery season and even put two stalks on him. On the first one, I got within 60 yards before a doe winded me. They were gone within seconds. I stalked him the second time after I had glassed him while he was bedded in a thick patch of ocotillo cactus. I thought it would be easy, but once I got into the ocotillos, I found out different. I was about 30 yards from the buck, trying to make my way between all the ocotillos, when he saw me move. He was up and out of there in a flash,” Orozco said.

The December 2000 hunt ended, and when the January 2001 season began on the 1st of the month, both the weather and Orozco’s work schedule prevented him from hunting again until the afternoon of Jan. 10th. An hour before sunset, he glassed a doe. Then he found the monster buck bedded down next to a barrel cactus in nearly the same spot where Orozco had stalked him two weeks earlier.

“He was maybe 200 to 300 yards away across the canyon. There was only about a half-hour left before it got dark, so I decided to leave him alone until the following morning. As I continued watching the buck, I heard a noise on the ridge above me, looked up and saw my friend, Pete Mendoza. I signaled him to come down. While waiting for him, I kept my attention on the deer. It was the biggest whitetail either of us had ever seen in the wild. Jokingly, I told him to have his camera ready because the buck would be mine tomorrow.”

Orozco didn’t get much sleep that night as he thought about the next day. “I was up early, ate breakfast and drove to the area, arriving about 15 minutes before daylight. It was overcast, with the temperature in the low 30s as I started to glass. Ten minutes later, I picked up three does in the valley. Then a respectable 3×3 stepped out of a thicket of trees. I would have settled for this buck any other time, but now the only deer I had in mind was the big one. I stayed there a bit longer to no avail. At 7:15, I decided to move to another spot that overlooked a valley and some rolling hills,” he said.

Almost immediately, Orozco saw three does moving among the mesquite trees. Then he spotted another doe. The buck, obviously with romance in mind because the rut was in full swing, followed close behind.
“As soon as I saw him, I started shaking,” Orozco said.

While he tried to calm his nerves and put together a plan, he watched the buck chase the harem of does all over the hillside. One doe raced over the top; the buck followed, and Orozco did likewise. He realized having fewer eyes and noses to tip off the buck would help during a stalk. At the same time, he was concerned about losing the deer after they had disappeared over the hill.

“It took about an hour to get to the top of the ridge where the doe and buck had crossed. Once there, I glassed about every opening and around every tree and cactus in the area. I found them 15 minutes later in a flat valley, less than 200 yards away. The buck even mounted the doe as I watched. About 11:30, he bedded down 150 yards from me in the open near three mesquite trees,” he said.

With the wind in his favor, Orozco started his stalk down a small canyon, which he thought would put him within 40 yards of the bedded deer. Instead, he wound up 80 yards away with the buck facing him. Orozco went to Plan B, opting to follow a creek bed that would take him behind the deer. He removed his daypack and shoes, leaving them behind to retrieve later, and slowly made his way to the mesquite trees. When he got there, the buck was nowhere in sight.

“I had last seen him near the tallest tree, but he was gone. I used my binoculars to search among the trees and found he had moved about 10 yards away to another tree, probably because it was shadier. Now, after seeing him close up, my knees began shaking and my heartbeat sped up. At a distance, the buck’s antlers looked big; close up, they were huge. Hoping to somehow settle down a bit I dropped to one knee for a couple minutes. Although the shaking didn’t quit entirely, I slowly inched along the creek bed. Then I almost blew it,” he said.

“While I was moving closer, I kicked a small rock and heard the ‘click’ as it rolled downhill into a larger one. I quickly ducked down, using some tall grass to hide me from the deer. As I watched the tips of his antlers, the buck’s head swiveled around immediately. His eyes aimed right at me. After an eternity, which in reality was only about 30 seconds, the buck turned away.”

“Not wanting to wait any longer, I nocked an arrow, took a few steps so I could see his vitals and drew my bow just as the buck’s head had turned toward me again. By then it was too late for him to react. I heard the arrow thump as it connected with something.”

“He jumped up, wheeled around and raced toward the spot where my shoes and pack were laying. After running about 40 yards, he stopped and looked back at me. Although his tail was moving sort of funny, I couldn’t see any blood. Now I began doubting whether I had hit him at all. I shot again. He jumped when the arrow hit him in the neck, and with four great leaps he disappeared over a hill,” Orozco said.

Orozco’s nervous excitement returned. He also realized that his sticker-filled socks didn’t feel too good. Rather than follow the wounded deer, he retrieved his shoes, had some water and then searched for the first arrow. He found it stuck in the ground where the deer had been bedded. Bright red blood covered the arrow from the point to the fletching. Finding the blood trail, Orozco followed it to the spot of the second shot and found that arrow, too. Blood also covered it.

“I continued along the blood trail up over the next hill and spotted the buck. He had gone down in a heap under a mesquite tree in the bottom of a small canyon. When I got down to him, I jumped and yelled, even though no one was around to hear me. For me, killing that buck was the greatest thrill of my life,” he said.

Although Orozco knew the buck was a real trophy, he didn’t realize just how much of a trophy it really was. He called a friend and asked him to score it.

“When my friend asked me how big it was, I told him it would probably score maybe 100 to 115 points. When Tony arrived, he was speechless,” Orozco said. “The gross score he got was 150.”

After the 60-day mandatory drying period, Jimmie Engelmann, a scorer for the Pope & Young Club, officially measured the buck, producing a gross score of 144 6/8 and a net of 132 6/8 for the typical category. The distinct drop tine resulted in a six-point deduction.

In May 2003, the P&Y Club officially recognized Sergio Orozco’s outstanding trophy as the current record with an official panel score of 130 1/8 – shattering the previous record by more than 10 points.