It all began about 4 years ago when I started putting in for this unit in south western New Mexico. I hunted it twice previous to this year and I had always had bad weather. I was supposed to hunt it with my friend, JR Lynch, who ended up having shoulder surgery and wouldn’t be able to backpack in the 5 miles necessary to get to our spot. So I went alone.

The sign as I was driving in said, “Watch out for drug smugglers and illegal immigration”. I had my satellite phone with me in case I got in trouble out there in the back woods away from everybody. So I took my satellite phone and my pack, which weighed about 70 lbs, packed in and set up camp. Thanks to my Kifaru backpack and the Kifaru 11oz shelter – it handled the weight well.

I set up camp Friday about midday. Friday Evening, I glassed up about 15-16 Coues deer and about 5-6 of those were bucks, probably an 80-90 inch buck. I saw one buck that was probably around 100 inches right before dark and was excited to start on opening day, Saturday.

So, Saturday, the 28th of October, I wake up before dark, make my oatmeal, and get to where I want to start glassing at before the sun comes up. I immediately start glassing up deer. Again, I found 12-15 deer in the morning, with 5-6 of those being 80-90 inch bucks. My goal is to be able to videotape the kill shot; and a couple of these bucks I could have shot, but I wanted to hold out for a bigger deer.

I hiked back to camp and made my “Mountain House” freeze dried lunch. I took my collapsible 2 ½ gallon water container, and hiked in to where there was some water. I purified the water, filled up my container, hiked back to camp and got ready for the evening hunt. The wind started blowing about this time, and I didn’t see any bucks in the evening and only about 10 does. The wind blew all during the night.

I woke up Sunday morning and the wind had stopped blowing right before light. I was excited to see what would happen, but again, I saw only about 10 does and one little spike buck. I was getting scared because the first year I hunted the unit, on the day before the season we saw three or four 100 inch coues deer. Then the first day of the season we had high winds and saw almost no deer. The next day it rained all day with the same 40-50 mph winds, and the last day of the season it snowed on us- so we had to pack out in the snow. By this time I was pretty scared of what might happen, so I decided that I would shoot the next decent buck I saw. I was done with the morning hunt, and I was going to see if there was some water in the bottom of a drainage, when I saw there were two bucks and a doe coming towards me. I ended up making a running 100 yard shot on one of the bucks with my muzzleloader. I was using the Knight Muzzleloader and the Power Belt platinum bullets did their job again!

I was about two miles from camp so I took my pictures, boned him out, packed him in my pack and hiked back to camp. I made lunch, packed up camp and put my pack together. It was now over 100 lbs. and was still holding up well to all the weight as I was packing it back. I had stopped on my way in before the hunt and filled up the ice chest with ice and there was still a lot of ice left in there. I put all the meat, the cape and the head on ice and loaded up the truck to drive home. I saw no one else when I was back in there hunting; the first time I saw people was when I got back to my truck and started driving out.

I’d like to thank all my friends and family for all their support. I thank God for the strength and the health to backpack alone into the wild, and the team of Hunt Scout Pro Staff. 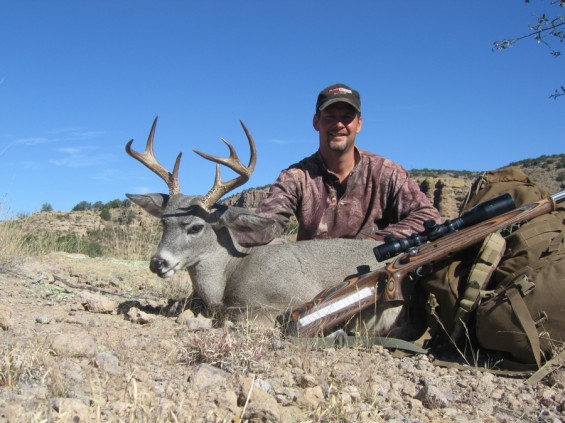