In early 2008 my brothers, dad and I began our normal discussion of where we should apply for deer and what areas we should hunt. My older brother talked about an area he had been driving by in unit 22  that he wanted to check out. We got drawn for the October hunt and the scouting began.

We went into that area to check it out and within about 20 minutes of glassing I had spotted 3 good bucks. They hung out for a while in a good spot and we were able to get a good look at them. Two of the bucks we thought would be in the 100 inch range with the third being an 80 inch type buck.

We returned multiple times to the area to scout and found a total of 13 different bucks, plenty of does and mule deer as well. However, we weren’t able to get eyes on the big three again before the hunt.

We had 6 in our hunting party with tags. We split into two groups. Myself, my older brother and my brother in law. My dad and my two other brothers in the other group. We each had a plan for opening morning that we thought would put us on some bucks.

My dad’s group had bucks within range before shooting light. They had some shot opportunities but they did not connect.

My group was on a point high above where we had first seen the big three. We glassed and glassed. After about 40 minutes I started glassing some country a little further out. Within minutes I had spotted two bucks and I was almost positive they were 2 of the big three. We quickly packed our gear, made a plan to get closer and then started running. We had a lot of ground to cover and the bucks were on the move. We made it to where we wanted to be and set up to glass. Nothing. Nothing but cattle, everywhere. We kept glassing for a few more before we decided to move up the ridge a bit further and get a better vantage point.

Again we set up to glass. It was about 8:15 in the morning and we decided we had enough country in front of us that we could stay in that spot most of the day glassing. We glassed up some bucks about 600 yards out heading in the direction of my dad’s group.

Within just a few more minutes, I pulled up my 10’s to glass a saddle just out in front of us and as I did our two bucks came strolling into the saddle from the backside. My brother ranged them at 447 yards. My brother and I proned out and dialed up the scopes to compensate for the range. My brother in law got ready to call the shots. As we got situated, my brother asked if he could shoot the bigger of the two bucks. I told him sure. We got the bucks in our scopes and did a verbal check to make sure we were looking at the correct bucks.

The plan: my brother would shoot first and drop his buck. My buck would stand still and I would shoot and drop him. Well…the plan came together perfectly. My brother got ready and touched off his shot. BOOM…WHOP! His buck dropped and started to roll down the hill out of the saddle. My buck looked around for a second and BOOM…WHOP! His legs folded and he dropped in his tracks. We could not believe what had just happened. We had taken 2 of the big three and they were laying dead less than 30 yards apart from each other.

It was so fun and such a cool experience taking a double with my oldest brother. His buck ended up being the biggest of the big three (my youngest brother shot the third buck the next year). He scores 108″. My buck scores 83″. 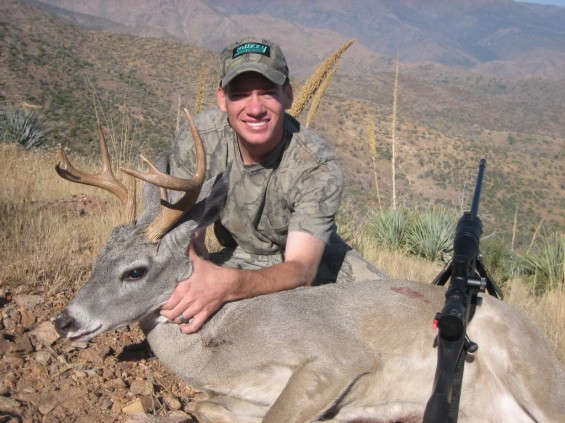 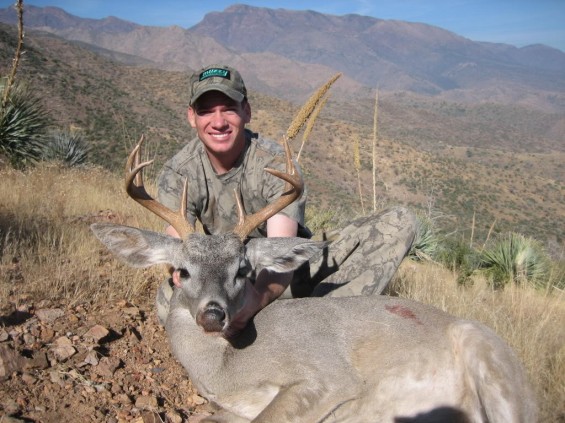 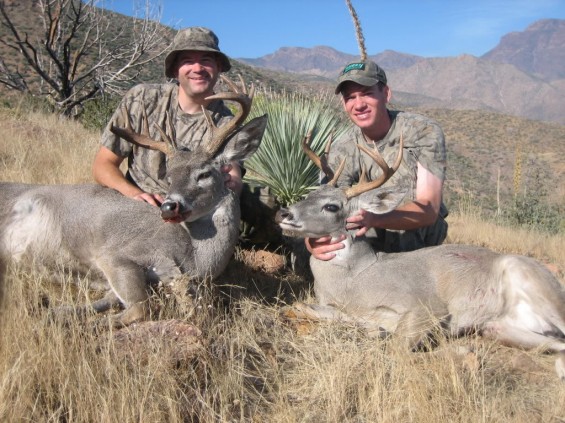