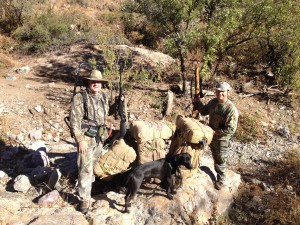 My November 2012 Coues Whitetail hunt has proven to be my most memorable hunt yet. We were hunting down south, about 22 miles north of the border. The previous year in this unit had gone well for us, with no sightings of any “mules” or other illegals. However, this year was different. The afternoon of opening day, I saw six mules (drug runners) pass above me on a high ridge heading north. They were moving fast and walking in pairs about 50 yds apart. I tried to raise the Border Patrol, but couldn’t get a signal on my telephone. I reported my sighting to the BP at their checkpoint later that evening, but by then the info was stale.

Two days later, I was heading back up that same canyon just after first light. The trail winds through the canyon bottom with lots of brush and trees in the river bed. I was in the lead with my young hunting partner a few steps behind me. I was looking for deer movement on the hills high above me, so I was a little startled to suddenly find a group of people coming down the same trail, but from the opposite direction. I quickly saw that they were mules with large packs on their backs.  We were about 10 yds from each other and it was clear that they were just as surprised to see me as I was to see them. We stood there facing each other for what seemed like an eternity. In reality, it was only a few seconds, but the mind seems to go into slow motion when these types of situations confront you.

I scanned for weapons on them, but found none. What I could see, was the tell-tale square, burlap bags full of drugs on top of their packs. Unprepared for a confrontation right there, I stepped off the trail and said the first words of spanish that popped into my mind: “olah”. The next thought that went through my head was: “you’re head-to-head with some drug mules on a trail in the middle of nowhere and ‘olah’ is the best you can come up with?” I gestured for them to pass by and vaguely remember muttering something like “por favor”. They moved past us and continued on down the trail. My partner and I hiked another 100 yards or so up the trail and around the corner before stopping to discuss what had just happened. We took a quick inventory of what we had seen. Once we were certain that drugs were involved, we felt we had to report it. But again, no bars on the phone.

So we scrambled up the hillside in the hope of gaining enough altitude for a line-of-site connection with the outside world. As we worked our way up the steep hillside, I kept an eye on the trail below us. I could see parts of the trail winding down the riverbed for a good half mile or so. As we continued to climb, I realized that I had not seen the mules heading further down the trail, nor had I seen them working their way back up to where we had last seen them. I knew they had left the trail, but had no idea which direction the were headed. Paranoia began to set in. I felt very vulnerable, in spite of the fact that I had a rifle on my shoulder.

I finally got a single bar on my phone and began dialing out. I had no luck reaching the BP or AZGFD, so I finally had to dial 911. The operator was very understanding. After she collected some basic information, she asked: “Is anyone hurt”? My reply was “not yet”. That seemed to motivate her even more and I was quickly patched through to the Sheriff’s office. They put me in touch with the BP. During all of this commotion, I noticed movement just off the trail about 600 yds. further down the mountain. A quick look through my bino’s revealed three men ditching backpacks and other stuff behind some trees. They pushed over a tall Century plant, as if to mark the spot and then disappeared out of sight into a side canyon.  They had stashed their “goods” so that if they were caught, they could only be charged with illegal entry into the USA and not drug smuggling.

I continued to watch the spot where the drugs had been dropped off, while using my cell phone to give the BP directions on our location.  After a half our, I received a text from the BP that they were at the trailhead and ready to start their climb up the canyon.  I waited another 15 minutes before coming down off the hill and on down the trail to where the drugs were located.  The BP agents reached the site about the same time I did.  They pulled out 9 square burlap packages of weed from behind the tree.  Each package weighed about 25 lbs for a grand total of 225 lbs.  It was pretty routine for them – an average drug bust.  They stated that their four man team average about 3,000 lbs per month.  So it was not a big deal to them, but a huge trophy for me.  Their are no inches or measurements to enter into any B&C record book, but the memories of this day will last me the rest of my life.  Hopefully, your 2012 hunt was just as memorable.