by Chris Dunn (aka Redbeard)

This has been a weird hunting season for me. First off I’ve had a rough few months with my Dad and two other friends having passed away. Secondly, I never like to hunt other people’s spots or info. I love scouting and having one tied up by opening day. With all the stuff going on and gas prices being so high I never went scouting for this hunt. Fortunately my good buddy and hunting partner Andy K. was on ’em like a looter in a New Orleans Wal Mart. I was leaving it all up to him and I was determined that this hunt would be fun and stress free. It turned out to be exactly what I needed. Thanks for being there to make it that way Andy.

Our big plans to kill one of the bucks he has trail cam pics of went out the window immediately since there were 36 trucks with God who knows how many hunters in his “secret” spot by sunup Friday. Somebody must have seen something and told everybody they knew and then some. We went for it anyway and were hiking in by 4:15 am Friday figuring we’d get ahead of everybody and let them run the deer past us. We sat in the dark for over an hour watching satellites and shooting stars cross the sky above and flashlights cross the desert below. I’ve never seen anything like it. Our plan worked as nobody hiked in as far as we did and we saw a ton of deer, probably 15 bucks but none of the big ones we had hoped to. I just hope some of the bucks survived all of the shooting. It sounded like opening weekend of dove season. Poor Andy and Devin have put so much scouting into that area. Hopefully it won’t be so bad for archery season.

We saw the biggest buck of the day while crossing a canyon to get on another ridge to glass. I stopped to take a whiz at the bottom and just about halfway through the process Andy starts shouting in a whisper, “Buck! buck! hey there’s a buck!” The damn thing must have been watching and waiting for me to drop drawers because he was only about 50 yards away when he busted. Somehow I shut off the flow and grabbed the rifle in time to get a look at him as he headed up the other side of the canyon. Looked to be about 85-90″ buck but I never had a good shot. I never would have thought it possible but I managed not to pee all over myself during the excitement.

We hunted a different area Sat. am with the same 4 am start time. More lying on our backs in the dark satellite spotting and we only saw 8 hunters. Unfortunately only 3 bucks too. Sat. afternoon we checked out another spot where we had wanted to go earlier but thought there would have been a ton of hunters. We were so wrong on the first place we figured this couldn’t be any worse. Guess what? Nobody was there. The area looked so good we both just knew we would be leaving with a buck. I had decided the next mature buck I saw was good enough. We hiked to the top of a mountain and crept up to the edge of a canyon on the other side and there was this buck standing under a tree below us looking like he was about to head out. I could see he was a good one so immediately told Andy I was going to take him. I didn’t bother to count points or worry about score. I honestly didn’t care. This was the perfect place and time to shoot a deer. As quick as I could I put the bipod up, ranged him at 184 yds, stuffed my ear plugs in, and as soon as the cross hairs were behind his shoulder I squeezed one off. Andy watched the bullet hit him and saw the buck drop immediately. That quickly it was over. It was 2 pm on a beautiful day so we took our time talking taking pictures and boning out the meat. We had hiked and hunted hard to get away from the crowds all day Friday and Sat. am and then there we were 20 minutes and less than half a mile from our quads and all by ourselves with nice buck.

Andy is a great friend and I couldn’t ask for a better hunting partner. He’s always up for busting butt and hunting all day. He totally pulls his weight (except this time he forgot food and water!) I’ve never hunted with somebody who is so much on the same program as me. He knows how to eat lousy food, sleep in the dirt, bake in the sun, freeze in the dark, pound the crap out of gear like he stole it and love every minute of it. You shoould see what he does to boots in a few months. He had his duct taped together for this hunt.

Even though we got shut down in his spot we just had a great time checking out new spots and giving eachother crap.

I think Andy should start an outfitting business, “Slam Dunk Outfitters” I think his motto will be, “We’re all ‘buck’ at Slam Dunk” Inside joke… We laughed all weekend about being “…all buck and s@%t.” 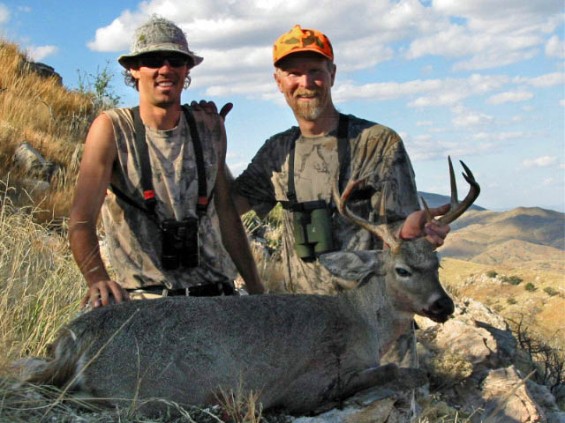