I invited my 11 yr. old boy and my 12 yr. old nephew to hunt with me. Of course they were there for the ride only.We got to this little hill that looked over this big canyon, I glassed up a total of 8 bucks and he was the one that stuck out. I let the kids look at him for awhile while I contemplated on how to get close to this buck. This buck and 2 others traveled down a wash and then proceeded to bed down on a ridge. From where I was at I saw that the 2 other bucks bedded on the other side of a ridge and this one bedded facing me. As I was glassing I noticed there was some surveyor’s tape just in front of him (that would serve as my reference point), it was thick with mesquite brush Palo Verde trees and prickly pear. He bedded between a mesquite tree and behind a prickly pear cactus.

As I got closer I had to climb over a barbed wire fence but the wind was perfect, a steady breeze and in my face. I was planning on getting to the surveyor’s tape and see if I could glass him up. I glassed to where I thought he was and found the prickly pear, the prickly pear had a tiny window and I could make out his right antler only through the window. I ranged from there and it was 55 yards, I proceeded a little closer and closed the gap to 40 yards using the prickly pear as cover. I drew my bow and walked to my left to clear the cactus, he was bedded facing me and looking right at me. I squeezed the shot off and the arrow entered right at the base of his neck going into his chest cavity. The buck bolted out of there and I could see my arrow at the base of where his neck and body met.

I marked the area with surveyor’s tape,ran back and got the kids to help me with the trailing, we found him about 2 hrs. later and my nephew was the one who found him. The buck grossed around 92″ and change, he was harvested in August of 2000 in unit 33. 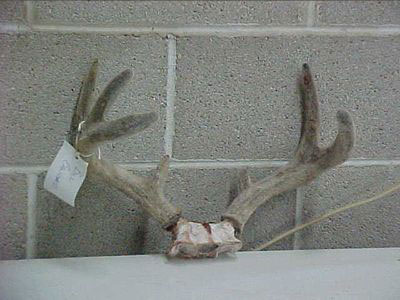