I was invited to join two friends in 6A to go to their secret spot. One of my friends had taken a nice buck in this spot the weekend before. He wanted to return to retrieve a couple of elk sheds he spotted at the bottom of West Clear Creek. It was a nasty day, and we spent a good portion of the morning glassing, and working our way to the bottom of the canyon. We found several lion kills on the way down, and saw lots of bear sign (I returned the next year and killed a big bear there). We got to the bottom of the canyon at about noon and found the sheds and a nice buck scull (another lion kill).

My friends have very good optics, and began scanning for bedded deer. I was told that because I was the rookie, and was invited to come, that I would get second shot (or first shot if it was a small one). At the time I did not have good optics, and I was spinning my wheels, so I decided to take a look over a small ridge. I was not 300 yards from my friends when I busted this buck out of his bed. I was lucky to get the shot off at 75 yards as the buck was hitting Mach 1. I had a good shot and he dropped about another 30 yards at the side of yet another lion kill. When my friends got there they were happy for me, but the one with the other tag was a little irked. His only reply was that he hoped I was in good shape, and it was a long hikeout.

I got drawn again for Coues the following year. On the last day of that hunt, I was in the vicinity of my kill from the year before when I spotted two bucks fighting. I began my stalk, only to see the deer fleeing as if spooked by another hunter. To my astonishment a lion came into view. I had made it a habit to carry a lion tag, and I began another stalk. Two hours later I took the lion from 330 yards (ranged). The lion was already sitting on a kill not far from where I glassed the two bucks. 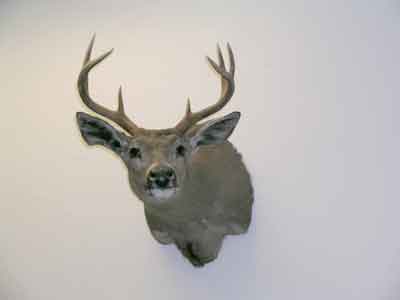