Brian, took a buck was at 25 yards after getting to within 100 yards, then rattling him into 25 yards (however, Brian isn’t completely sure the buck came to the rattling or was just coming that way anyway!). He  is a 4×4. Brian says this buck isn’t as big as the one he got last Jan., but it’s a still a trophy in his book!

After taking care of Brian’s deer, that evening, his brother, Grant,  proceeded to miss two bigger bucks (20 and 30 yards) due to those pesky treelimbs. Monday morning found the brothers looking over another 3×3 (plus 1 eyeguard), a two point and a doe. They watched the doe go over a short saddle while the two bucks lagged behind. They decided to see if they could intercept the bucks at the saddle. They hurried as fast as we could without making too much noise, finally reaching the saddle. They just made it there as the bucks came through. At 40 yards Grant missed under the 3X3. He just trotted a few steps sniffed the ground and lip curled. Now at 45 yards, Grant drilled him. He only travelled 30 yards before going down. He is a real pretty buck with only one eyeguard.

Total in two days hunting these brothers saw 13 bucks, the largest would have scored well over 100. The bucks were chasing does all over the place. Not bad for a two day hunt! 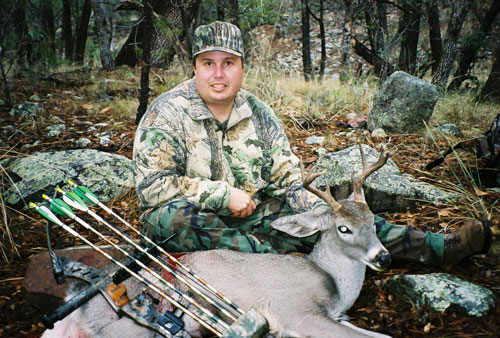 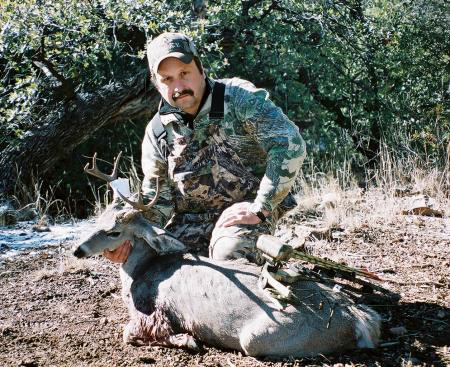