When the draw results for the 2006 fall big game draw came out, I was pleased to see a November 36B tag had found my name. Alright! I get to go deer hunting I thought to myself. Over the past years since I signed up at CouesWhitetail.com my love for these beautiful deer has grown immensely! I have learned a lot from CouesWhitetail.com and have met a lot of new friends. Now, back to the hunt.

The summer was spent hiking, jogging, preparing gear and discussing the plan for the hunt with my dad Mick, who also drew a tag with me. I spent many days reloading and testing loads for my 270 WSM and my dads 7 RUM with a good friend of mine named Doug. He and I spent many mornings at the range testing and retesting hand loads. I settled on a load that shot .184 at its best and will produce less than half inch all day. Dad’s rifle did not fail to produce either, shooting less than three-quarter of an inch routinely. Now the rifles were taken care of, no excuses to miss this year!

I had an opportunity to take a guiding job for the early hunt and of course, I jumped on it! This three day hunt was great for me! It got my heart pounding and added fuel to the fire that I have to hunt these grey ghosts! With great anticipation, I counted the hours until my hunt would begin!

Go figure, when I made the three and a half hour, 230 mile trip down from Flagstaff, I could feel myself getting sick! Sure enough, when opening morning came around I felt like… well, you know. It was a struggle to wake up to the day that I had waited for for months! When I came to realize I was going to hunt deer, I was up, dressed, quad warmed up and breakfast down in world record time! Dad and I started the day off with going to the place where I killed my first deer. There we saw a few does but nothing else. We then took a ride down the road, hiked in a little bit and started glassing. I glassed up a couple of does feeding in the bottom and realized I had left the range finder at the quads. I got up to go get it and when I was 15 yards from my dad he had bucks! Three of them and he thought they all were 80”+!! To say I was excited and the blood was pumping is an understatement. I hauled but back to the quads and when I got back we planned a stalk. I made a loop to a red rock face and when I was there, I got my rifle set up; the bush ranged and started glassing for the bucks. The bush was 308 yards away, so I adjusted my turrets in case of a shot. Right off the bat I had one looking at me. He was a tall fork, not a bad buck but not what I was looking for knowing he was with other bucks, I let him walk and did not see the other bucks.

The next morning dad and I went to the same place early and started glassing the same area. After an hour or more of glassing, we had the same fork with one of the big boys and man was he nice! He had to be 95”!!! Again, there goes the heart!! Well, it didn’t work out and a stalk was not possible because of where they were. The rest of the week went by with out much activity, no nice buck’s just small forks and spikes.

Sunday, being the last day I had to pull out all the stops! A friend of mine, Brian came out with me knowing anything with antlers was getting lead flung at it. After an eventful ride in where I had to buy about 8 gallons of gas for $35 from a camp, we were at our hunting spot! Brian and I started by walking north and glassed from there. Nothing. We then hiked a little bit to the east, within 5 minutes Brian had a deer. He zeroed me and my Zeiss 15×60’s on the area and I had the deer. I was watching this deer when another deer walked into my field of view. I got him on the spot and we both agreed that it was a buck. We could not put antlers on the deer because of the rising sun being in our face, but could tell the way it was acting that it was a buck. We agreed that IT was on… away we went. The buck was at least three- quarters of a mile away and we knew he wasn’t going anywhere so we took our time. On our hike over there, we kicked up a spike at 35 yards. We then saw the spike on the other side of the hill at 246 yards I set up for a shot but he topped over. We got a little confused on which hill was our target hill and almost walked onto the wrong one. When we both agreed we were on the correct hillside, Brian set his backpack down and told me to top over where I could set up. I picked a perfect position and when we topped over I set up my Harris bipod and my backpack and just laid down looking for the deer. It took Brian about 30 seconds to find the deer and confirm it was a buck! He ranged the buck at 280 yards and told me where he was. I adjusted the turrets on my Zeiss scope and was on the buck. We had to wait for him to feed out of some ocotillos for about 15 minutes. During those 15 minutes, Brian decided it would be a good idea to mess with me. “He’s huge! He has to be at least 100. I think he has some kickers and cheaters. Man he’s awesome” (like I needed any help getting the blood and adrenaline flowing.) When he stepped out, I told Brian I was going to shoot. I moved the safety on my custom 270 WSM, did the breathing exercise and began to squeeze the 2.5 pound trigger. When the trigger broke, the rifle barked and the bullet slapped meet. The first words out of Brian’s mouth were “Guess what?” My response was immediate, seeing the buck go belly up in my scope “I rolled him! I freaking rolled him!!!” I put another shell in and watched for about 30 seconds just to make sure. We then did the normal high fives, jumping up and down and some more high fives! To say we both were excited is correct. We gathered our stuff and went over to find my buck. Well, our landmarks were a little bit off and we had a tough time finding the buck, I was getting a little nervous and began doubting the shot. Brian went back to where I shot from and directed me to the buck (about 80 yards left of where we were looking). There he was! The turrets did not let me down as the bullet hit EXACTLY where I aimed. A high shoulder shot dropping him where he stood! After the pictures and field work, our hike out was on. It was 1.3 miles back to the truck said the GPS. On the way out, we heard a shot right below us. When we got back to the truck, the hunter that took the shot stopped by and said he missed a very nice buck that we had kicked out. We talked for a while and then loaded up the buck and went home. It was a good day as this was my fourth buck in a row! I would like to thank Doug, who has spent a lot of time teaching me how to reload, and spent many mornings with me at the range. My dad, for hunting with me and getting me into hunt, and Brian for being there with me to shoot my buck! 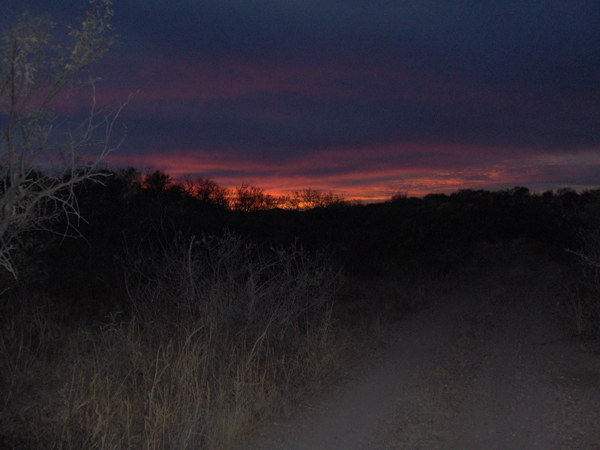 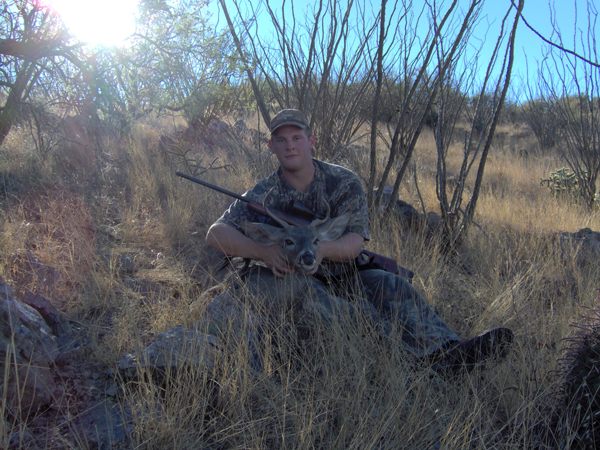 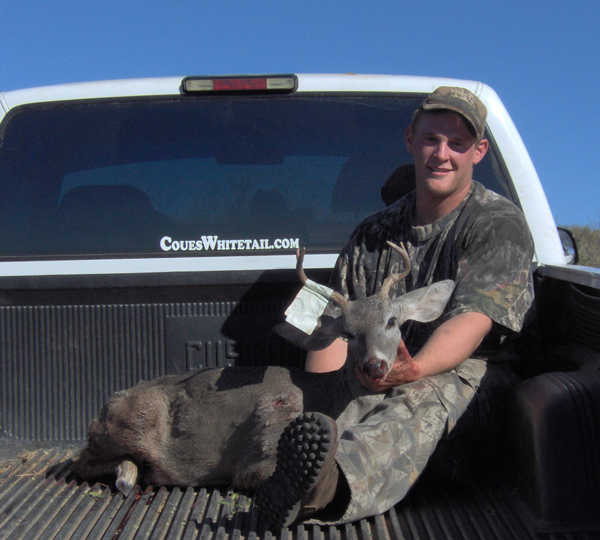