After 5 years of hard hunting with never getting a shot at a Coues deer, my dad and I decided to look into investing some money in some high quality optics. We have hunted with a friend who owns a pair of Docter 15×60’s and every year he has gotten himself and his son a pair of decent bucks. Whenever we hunt with him he always glasses up more deer in one day then we manage to see through the whole hunt. This year my dad and I acquired a pair of our own Docter 15×60’s and a pair of 10×42 Swarovski’s from a close family friend.The opening weekend of the November deer hunt in the southern part of Arizona was finally here! Camp included Mike, his son Westin, my dad and myself. Westin and I were the only ones who had drawn tags for that hunt, (my dad drew the December tag) and we were ready to go.

My dad and I could not hunt opening morning due to one of my last football games ever, but when we finally got to camp; we were buried in good news. Mike had seen some monsters. With his pair of Docter’s, he had glassed up a buck that he thought would go between 110-115. Mike and Westin had glassed this buck up bedding down from about a mile away. By twilight, they had stalked to within 200 yards. Should be a chip shot on a good Coues right? Well buck fever began to set in and my hunting partner, Westin shot high, right over his back. Although I was disappointed to hear that he had missed a great buck, I was excited to hear that there were some good bucks in the area and I thought I had a good chance to get my first shot at a big buck.

My dad and I glassed our butts off that weekend but never could put antlers on any of the deer we glassed up with our tripod mounted Docter’s although we were seeing a lot more deer then usual. Westin had missed three times at different deer before the weekend was over but we all stayed confident. On Sunday, my dad and I went out around this waterhole and never saw a deer. This was frustrating to not see a deer on the last hunt of the weekend.

The next Saturday, we were at it again. Westin and his dad decided to do a “drive” per say. My dad and I stayed on a ridge over looking a big canyon that they would be working. We watched as they went around a hill and sunk  into the bottom of the canyon. About five minutes later, my dad says “Casey I found you a buck he’s a good one, hurry and get on him.” I look to find him with the Swarovski’s thinking that he was only a couple hundred yards away. I hurriedly asked my dad where he was and he said over there, on top of that ridge. I said “Dad the only ridge that I see is about 500 yards away.” “He says exactly, that’s it get on him.” By the time I got my gun on him, he was just getting over the top. That was the first buck I had ever seen during a deer hunt.

The next morning, we all decided to drive down to the flats and hunt from there. We all walked around this hill to a peak with a good view of the mesquite and cactus covered flats where it would be possible to get a shot  anywhere from 100 to 600 yards. My dad and my hunting partner both set up their Docter’s and started glassing each facing different directions. We sat on that ridge for about an hour or two. All of a sudden, Mike, Westin’s dad says “I got one, and it’s on the move but I can’t tell what it is but it looks like it might be a buck.” We all pack up and move to a nearby ridge where we can get a better look at this deer. When we get to the ridge, Mike says “Everybody get down, I got it.” We all sit down and my dad and Mike both set up their tripods. Mike was giving my dad directions to where the deer was, “Go to the cedar and go about 100 yards to the left.” My dad went to the cedar and said, ” I see a buck!” I put my backpack on top of my dad’s while Mike ranged him in. By this time my adrenaline was already pumping hard. I couldn’t believe it, I was actually going to get a shot at a buck, and I had broken the curse! Mike ranged the buck in at 340 yards, “Wait until he gets to a clearing and take him. Ok there’s your shot, take it” BOOM! My 30-06 rang out into the silence of the day.”

“You hit him, get him again BOOM! BOOM! The big buck went down. We all watched where he went down as I reloaded just in case. I was so excited, I could barely get the bullets in the magazine. We waited about 20 minutes and sent Mike and Westin down to see if he was deceased or just lying there. The plan was that they would go down and  to the left so that if he wasn’t dead yet, they would kick him out to the right where I could get some more shots off if need be. I was watching them and the mesquite that my buck had gone down in the whole time. All of a sudden, I hear Mike yell out ” Shoot! Shoot!” I’m looking for movement and cannot find any. Then, all of a sudden I see my buck running away, by this time he is at about 400 yards and running as fast as a deer can with a whole in one of it’s front shoulders. The first two shots sailed high, then I knocked him down but he got back up. The next shot knocked him down again. That deer would not stay down. He got up one more time. My dad said to me “You have time, finish him off.” I put the crosshairs about 10 inches over his back and put him down. I know it was a lot of shots but hey, I’m only 17 and I was excited.

Before I knew it I was running down the hill to see my first deer. Everybody in camp was jealous of my buck because it was the only one taken. When we took it to the taxidermist, he said that it scored 82 2/8 B/C. That’s not a huge buck, but it is one that I am awful proud of and I will never forget. If it wasn’t for my dads Docter’s, we might have never seen the buck and I would have not gotten a shot. Or Mike would have seen it first and therefore Westin would have gotten the first shot. 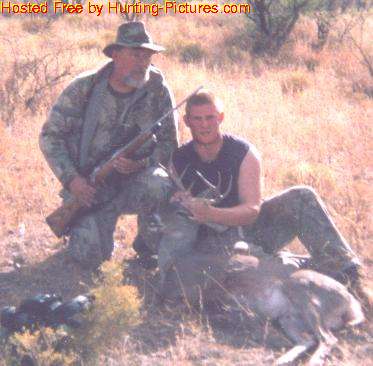