It all started in January 2007. I was helping a friend scout for his upcoming rifle Javelina hunt. I took him into an area of 36B that I had seen Javelina in before. We hiked the mile into a big canyon and I set up my 15X Minox and started glassing.

After about an hour of glassing and seeing one herd of Javelina and several nice 3×3 Coues bucks I caught movement on a ridge about 600 yards away, I fixed my binos on the area and peered through them. I could not believe my eyes! I was watching a very nice Coues walk up the ridge then slowly disappear over the other side. Right then and there I was on a mission!

The draw came and went and much to my delight I had drawn a November Coues tag for 36B. I went out and bought a trail camera in August and placed it on the ridge I had seen the buck on. I would make the trip to check my camera twice a week, 180 miles round trip each time. At first I got several decent bucks on the camera. Then on the 29th of August I made the long trip to check the camera, after a 1 1/2 mile hike into my camera, in 95 degree heat I sat under the tree that the camera was placed on and reviewed the photos. I could not believe my eyes! There he was, a huge 3×3 with long main beams! 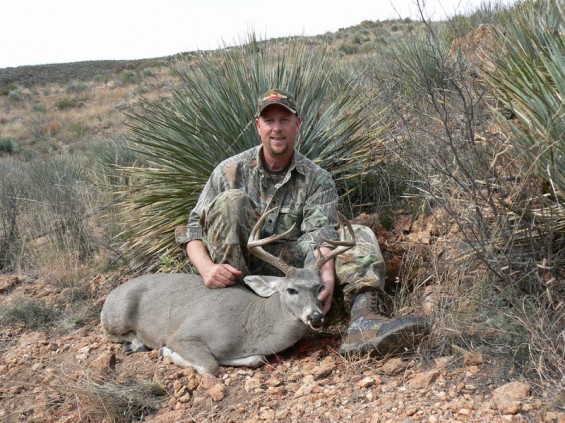 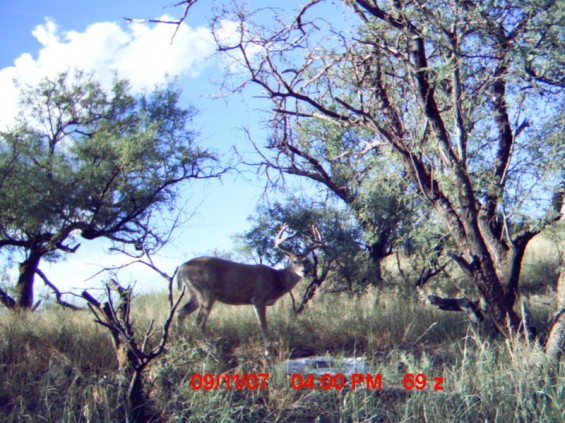 I ended up getting over 40 photos of the buck that was now named “Diablo”. I just hoped that he would make it through the first season in October!

A long 3 months passed until my season began. My son (Levi) had drawn a tag with me. I would send him photos of the bucks I had on camera so he was ready to go opening morning!

Opening morning found us at our parking spot with plenty time for us to make the hike into the area we wanted to hunt. Much to our surprise there wasn’t another soul in the area, now for any of you that have hunted an early hunt down south that is pretty amazing in itself! Not wanting to spook any deer off the ridge we took the long STEEP way into a vantage point to glass from. We slowly made our way to our glassing spot, the excitement was almost too much to handle! I couldn’t get my tripod and glasses out of my pack fast enough!

As we started scouring the adjacent side of the canyon something told me to move up the ridge a little further and glass back to the West. I made my way up the ridge and set my tripod and glasses down, took a quick look around and settled in. Without moving my tripod I peered through them and something caught my eye, it appeared to be the hind end of a deer. I got comfortable and studied the object which was about 1500 yards away. It moved! Not only did it move but it had a massive set of antlers attached to it’s head as well! I looked for a few more seconds then picked up my gear and quickly made my way back down to where Levi was glassing. Levi turned and seen me coming down the ridge and he immediately knew what was going on!

I guided Levi to where the buck was, we watched him for a couple of minutes (which felt like a whole lot longer). I asked Levi if he wanted to make his way over there and try to get into a good shooting position and I would stay put and guide him in. Levi turned to me and said “that is your buck” I asked one more time if he was sure and when the word “yes” started to leave his mouth My pack was going on my back!

I was down the ridge and through the bottom in no time at all, I had landmarked some rocks that I though would put me right where I wanted to be.

I slowly climbed up a sheer rock face, placing my rifle above me on ledges then climbing up to it. As I reached the rocks I took my pack off and caught my breath. I then radioed Levi and asked him for an update on the bucks position, he answered back “he just laid down”

I snuck over the hill straining my eyes to catch any movement at all on the next ridge. I then settled in beneath a small tree and began to scour the hills with my 10x Leicas.

I am sure you all have been there before, nothing looks the same! What was once two dimensional from 3/4 of a mile away seems to take on a whole new look! I radioed Levi again and asked for another update, Levi answered with “he’s laying behind the half dead Yucca” I looked back at the hillside and there were no less that 5000 dead Yuccas!

After an hour of eye bulging intense glassing I caught a slight movement! I focused on the area and finally made out two long tines sticking up over a “half dead Yucca! I immediately ranged the buck, 232 yards! I settled in to wait this buck out.

After almost an hour I had played a million different outcomes to my situation through my brain. The beads of sweat were now rolling down my brow and seemed as if this buck was never going to move! I weighed my options and concluded that it was going to be now or never!

I could now see the bucks entire head and about 4 inches of the right side of his neck. I thought long and hard and decided that I was going to shoot for the neck. I radioed Levi and told him of my plan, there was a long silence then an answer “it’s up to you boss”

I figured I would have only one chance at this deal, I set my mind right knowing that I could hit that spot all day long on paper, so what’s the difference. right?!

I flipped the bipod out on the .300 win mag and located the buck in my Leupold, checked the range again, yep! 232 yards! I got in and out of the rifle 3 or more times until it felt comfortable, slowly squeezing the trigger I felt the recoil of the rifle against my shoulder. Before I could regain my sight picture through the scope I heard Levi screaming from 1500 yards away “you got him! you got him!” I looked through my scope to see the bucks legs now sticking up over the “half dead Yucca”

Not until I made my way over the downed buck did I realize that this was “Diablo”, the buck I had watched through the summer. I stood over Diablo with a mixture of overwhelming happiness, a sense of achievement, a little sadness knowing that the buck that had consumed my summer scouting had just fallen.

I My 2007 season was everything I had dreamed of over the months prior and who better to share it with then my son Levi!

Next year you can shoot first Levi…………I promise!