(originally posted in the forum)

I had just found out that I drew a coues tag for southern Arizona on the November hunt. It had been 3 long years since I had hunted the great state of AZ, since I had to moved to California. It felt great knowing I’d be back in my “old stomping grounds” hunting deer. I had planned on hunting the entire hunt with aspirations for a big coues in my crosshairs. Plans soon changed when I recently became a principle of a new real estate company just a month before the hunt. I now had to attend a 4 days R.E. conference in Phx, and fit hunting in the trip. So, making the best of the great new opportunity, I called my soon to be brother in law and asked him if he was down for a road trip. He gladly accepted, as it would be the first deer hunt he will be on. Jared was certainly a trooper. Hanging out for 4 days while I’m in conference learning everything under the sun, all the while I keep dreaming of harvesting my first Coues buck.

I had hunted Coues deer before with my good friend Allen Taylor and his son Travis. Allen got me hooked on Coues from the first hunt. I had always been a muley guy; still am too. But it was sure a lot of fun glassing up the little gray ghosts and trying to get in on them. I had learned this particular unit hunting w/ Allen. So I felt fairly confident I could get a buck. But with just a day to make it happen before I had to return to California, the odds were stacked against me. It had been 3 years since I’ve been to my hunting area and reports from some friends on www.coueswhitetail.com weren’t the best. It was DRY and HOT! This wasn’t going to be a picnic, not that hunting Coues deer ever is.

We left the conference Wednesday at noon and hauled truck towards the boarder. We arrived and set up camp around 3pm. WE decided to drive around and scout things out while we had a little day light. An hour or so of glassing resulted in nothing. We headed back to camp and roasted hotdogs over a tiny camp fire.

We woke up early Thursday am. I got to my spot right on time and set up to glass. About 8am I was getting discouraged. I hadn’t glassed up even one doe and it was already getting very warm. As I sat there scratching my head, I noticed a white flash out of the corner of my eye. I swung my 15x Swarovski’s and saw 3 illegal’s running through the bushes trying to get in the shade before it got too hot. As I sat there watching them make beds out of dry grass and I was thinking that I needed another plan. Those guys were going to be there all day.

Driving back to camp I was thinking of back up plans 2 and 3. I had a couple other areas I wanted to check out. My bro in law and I went to another spot and go out and started glassing a bedding area. I immediately picked out a herd of javelina and told Jared where they were. AS I sat there watching these pigs get ready to bed down, Jared asked, “Is that a deer?” “Where”, I asked? He told me where he was looking and I got the big 15’s on that spot. AS I starred into the binos…I could barely make out what appeared to be a deer. We decided to get a closer look. We hiked about 500 yards closer and I could make out a deer. Then he turned his head….I saw his 4×4 rack clear as day under that mesquite tree. He was a mature buck, for sure. We decided to back out and get in EARLY the next morning, opening day.

We spent the rest of the day driving around talking, laughing and just enjoying the beautiful southwest desert of AZ. We even got to shoot a couple of jackrabbits. Great practice for tomorrow’s hunt.

We woke up at 3:30am. We wanted to be the first hunters in the mountains. We got to our spot about 30 mins before sunrise after a grueling 2 mile hike in. AS the sun began to rise, we were seeing deer. A few does and spikes at first. But as the morning slowly woke up, so did the action. After the shooting started, the deer were running all over the place. But we had a problem. They were too far away for me to make a shot. 600 yards at a running deer isn’t a shot to me. We had to get closer. We grabbed our gear and run up the nest ridge. Right when we got on top, another herd of does come running through. WE settled down on a great vantage point and could see almost 360 degrees around us. Just as we get settled a couple of other hunters decide to perch themselves on top of the highest rocks they could find. Needless to say, for the hours that they were there, we didn’t see any deer. Around 10am the hunters left. WE were in for the entire day. This was the only day I had and we were making the most of it.

Come 10:30 another herd comes though. One mature buck is in the group along with a couple smaller bucks and some does. I get on a point and wait for them to come out of the drainage they went into. 5 minutes, nothing. 10 minutes, nothing. Where did they go, I thought? Just when I was about to turn around I see one of the bucks running towards us. Something spooked him out of that drainage, and as he came closer and closer, I notice he’s slowing down. By now I have my Lazzeroni Firebird shouldered and on a rock rest and have him in my scope. I watchn him for a few seconds and he finally stops. I let the big dog bark! DOWN goes bucky! A perfect 201 yard shot. I had just tagged my first Coues buck. After the high fives and hugs w/ Jared we began the work part of the hunt. The buck was a 2 ½ year old with 3×2 rack. We gutted and boned the deer out on the mountain and hiked another 2 miles back to the truck. As we were driving out we happened by the G&F officer. He was very pleasant and said that the hunting had been very difficult with it being unseasonably hot for this time of year. I was the only hunter he had come across opening morning who had harvest a buck. I felt very fortunate to have been blessed with the opportunity to not only harvest my first Coues buck, but to do it with the odds against me. But the best part of the trip was sharing it with my future brother in law who’s not only family, but a friend. 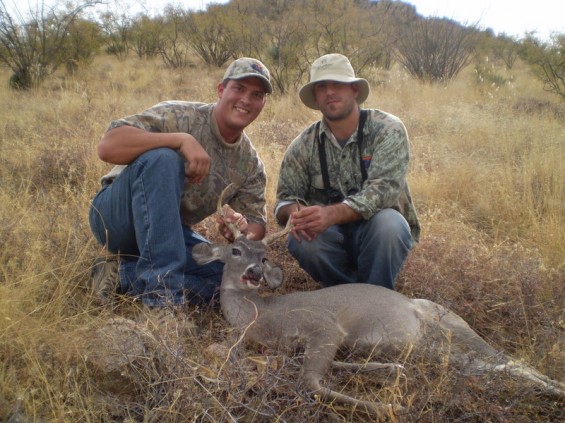