First Coues Buck with a bow, spot and stalk 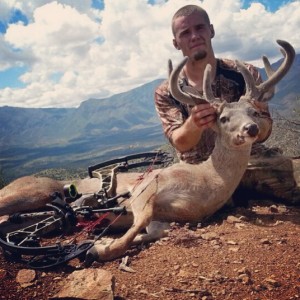 with back drop of area I was glassing 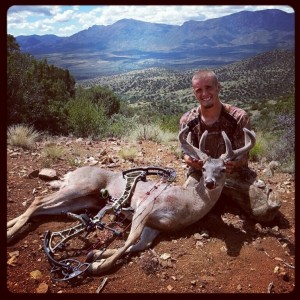 more of the area I was glassing 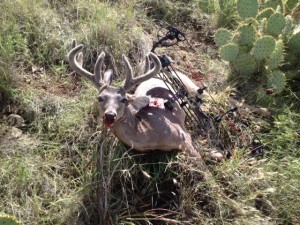 where I found him laying, propped his head up with sticks 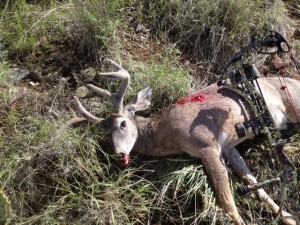 where I found him, 100 yards from where I shot him 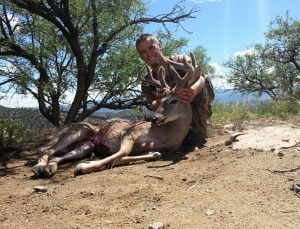 So,  my friend Colton already posted a picture of this buck last night, but here are some more pictures along with the story.

I have stalked 1 mule deer and a bachelor herd of 3 mule deer this season, and in January and last August I have stalked a total of around 30 bucks. Everything from spikes to giants.  I stalk any buck I see that is within a couple miles if I can get to it before dark.  I am not too concerned with antler size, I was just blessed with a great buck.

I was glassing for a few hours like I do almost everyday of hunting season.  As it was getting a little warmer I was paying more attention to bedding areas.  I finally caught a glimpse of a buck standing and feeding in a bush at the top of a hill about a mile away.  I watched him walk in between a few bushes and never emerge from the other side.  After watching for about 10 minutes, I figured he bedded down right there.  He was in an area the wasn’t too thick and I could see I would have some shooting lanes if I went and waited for him to stand from his bed.  So I began my stalk.

I went to my truck and dropped off my tripod and my Vortex 15s.  I grabbed a couple waters, my home made Sneaky feet (I made them out of automotive headliner carpeting, string and hot glue so I could slip them over my boots, I was sick of walking through the desert in my socks, and this was the first time I used them and they worked great, very quiet),  painted my face and sprayed down with scent killer.  As I walked to the top of the mountain the wind was perfect.  I could see the bushes he should be bedded in so I would take a couple steps and look through my 8s, then a couple more and look again to see If I could pick up an antler tip or any movement to make sure he was still there.  And I was also checking in the areas around there to see if he was somewhere else.  When I was about 150 yards away I picked up a buck feeding in a different bush.  After watching for a minute it seemed that he was content in staying there so I planned my path to come around some bushes and wait for him to step out and hopefully shoot him.  But I know Coues bucks often travel in pairs while in velvet, so I was keeping my eye on the bushes I had seen the buck earlier, just incase this wasn’t the same buck. As I was rounding the final bush where I was going to stop and wait for that buck to feed out, I stepped out onto a rock and looked in to the bush where I had seen the buck originally.  There he was standing right there still feeding in that bush about 1.5 hours from when I had seen him with my 15s.  So I froze, ranged him (luckily I have one of those range snap things, mine is actually home made but after sewing it onto my bino harness strap and getting the connectors, clips, etc. and doing all the work, I wished I would have just bought one) and adjusted my hand on my bow, as I did this he whipped his head up and the staring contest began.  I did not move a muscle even though my left leg was shaking so bad I thought I was going to fall off the rock.  He kept doing the whole head bob, foot stomp thing and taking steps toward me.  After about a minute he turned broadside but was still staring at me.  I was afraid to draw because I have done it with a few bucks and they are usually about 100 yards away by the time you reach full draw.  So, I said a quick prayer and felt like God told me to draw.  So I focused on a spot dead center of his lungs, reached full draw, quickly set my 40 yard pin and watched my arrow hit dead on and pass through him.  I watched him run straight down the hill spraying blood. I thought to my self, “God, please don’t let me wake up.”  Because I could hardly believe it actually happened.  I went over found my blood covered Easton Axis with the Spitfire broadhead fully opened.  I sat down and called my wife who was at work and my mom who was watching my 2 boys and told them I had just shot a great Coues buck.  Since I didn’t hear him crash I waited for about 20 minutes.  I would have waited longer but I knew the shot was a perfect double lung pass through so he had to be dead.  I followed the blood trail about 100 yards and found him laying there. I grabbed ahold of him and realized how nice of a buck he really was and I was extremely excited and thankful. Then I took a few pics,  called someone to help me pull him out, pulled him into the shade to gut him. My friend arrived and we got him to my truck. I brought him to the Mogollon Taxidermy and had him caped out.  Then brought him home and took care of the meat.

The equipment I used for this hunt was:

God who is the ultimate hunting guide, my wife for always letting me go out and always shoots bows with me, my mom for watching my kids,  Isaac for helping pull this deer out (even though he almost had a heart attack), Jeremy at Chasin a Dream Archery shop who always has great products and helps me with tuning and servicing my bows, and Coueswhitetail.com members for all the knowledge I have learned through reading your posts.

Hope you enjoyed the story.