Home / Hunting / How to score a Coues Deer

How to score a Coues Deer

May 22, 2012 by CouesWhitetail in Hunting with 0 Comments

(All photos are copyrighted by CouesWhitetail.com and are not to be used without permission. Thanks to Tony Mandile for editing some of my photos)

For the most part, other recordbooks, such as those for Longhunter Society, Pope and Young, North American Shed Hunters Club, and Safari Club International use the same measuring system which was developed by the Boone and Crockett Club. Safari Club International (SCI) is the only club that does not deduct inches for lack of symmetry and mass. SCI scores are roughly equivalent to a Boone and Crockett score before deductions (otherwise known as the gross score).

There are two categories for Coues Deer in the Boone and Crockett recordbook, typical and non-typical. A typical buck is one that has most of it’s tines coming off the main beam in the standard fashion for this subspecies. For a non-typical buck, there are several tines that come off the beam in abnormal fashion. In general, non-typical points are those that come off the side or bottom of the main beam, are located in an unusual place on the main beam, or branch off from a normal tine. When scored as a non-typical, those abnormal points are added into the score rather than subtracted as they are for a typical score. If a buck has many non-typical points it should be scored as a non-typical. A buck can only be entered into one of the two categories. The final decision on which category the buck is entered in rests with the hunter.

Table 1.  Entry minimums for Coues Deer by category and type of recordbook.

I also have some Excel spreadsheets that you can download if you would like.  These are simple spreadsheets in which you enter your measurements and it will calculate the score of the buck.  Feel free to save these spreadsheets on your computer for your personal use.  I have saved them in an older version of Excel (ver. 5.0) so that most people will be able to load these.

In order to take those measurements you need some equipment.  For most measurements you want to use a 1/4 inch wide, flexible steel measuring tape with graduations in sixteenths of an inch.  I find it is also very handy to use a flexible steel cable and an alligator clip to take measurements.  For the inside spread, a carpenter’s ruler, which has the extendable section on it is best.  I also find it helpful to use masking tape on the antler so that my marks are removable and they are easy to see for measuring.

The photos below show the basic equipment and techniques used for measuring the antlers of a Coues White-tailed Deer.

Let’s use the following buck to demonstrate some of the measurements.  This buck has several features that make it excellent for demonstration. 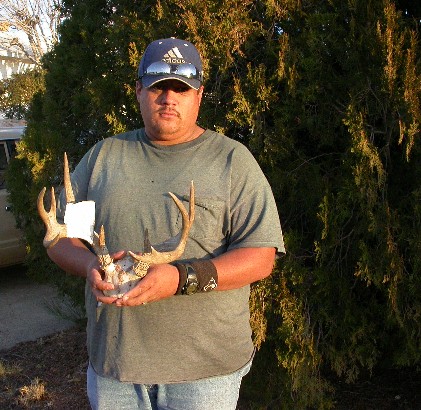 Jeff McFadden holds the buck he got on the San Carlos Reservation during the October 2002 hunt. 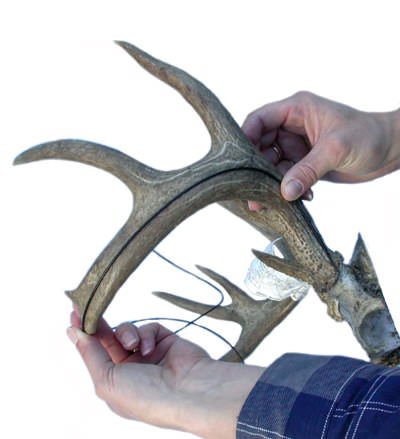 Tine lengths are very important measurements and can be somewhat difficult.  The critical part is marking the baseline correctly.  The baseline of the tine is where it meets the main beam.  But generally the tine spreads out at the base and so you want to make sure you are really marking the baseline, not just the swelling where the tine meets the main beam.  Many people who are not certified measurers will make this mistake, which results in shorter tine measurements.  All tines are measured on the rack as long as they meet the definition of a legal point.  In general, that definition is that they must be at least 1 inch long and longer than they are wide. 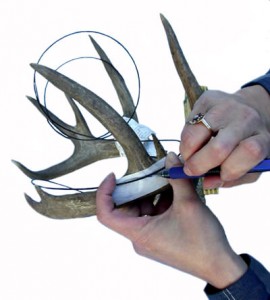 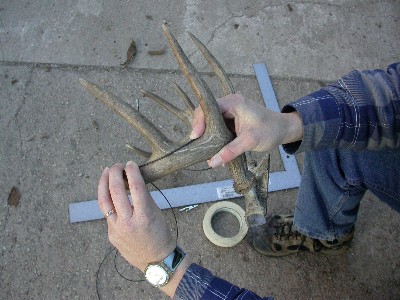 Marking the baseline. See how the tine swells as it nears the main beam? To make the proper mark, the baseline should be below the noticeable swelling of the main beam created by the “influence” of the tine. This may be easier to see in the lower photo. Many people would incorrectly mark the baseline higher than is show here, resulting in shorter tine lengths. Note also the use of masking tape in the upper photo to make it easier to see your mark and to make the marks removable. If you don’t have masking tape, you can use a pencil to make your marks. 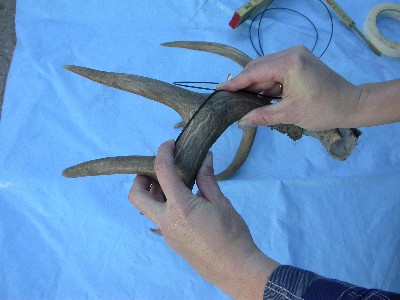 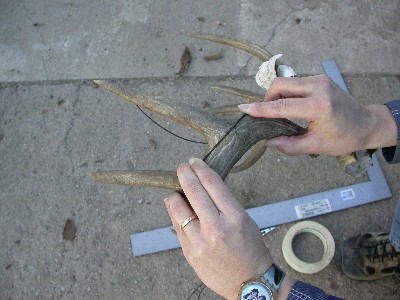 The baseline should be drawn so that it follows the natural curve of the beam. The photo on the left demonstrates how the baseline follows the curve. See how the curve in the cable is the same as the curve in the bottom of the main beam. The photo on the right demonstrates the incorrect way to draw a baseline. In that photo, the cable is pulled straight and is not following the curve of the main beam. 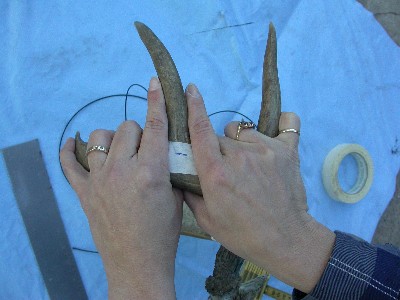 After drawing the baseline, you must determine the center of where the point meets the baseline. You can do this by using your fingers to mark the edges of the tine as it comes into the main beam. Then put a mark on the baseline to indicate the center (that mark is not shown in this photo, but would be made at the center point of the tine where it meets that blue baseline). 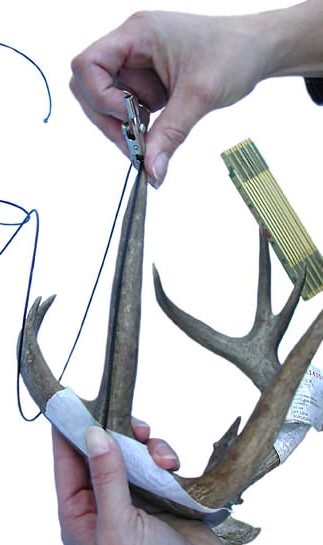 Points are measured from the center of the tine where it intersects the main beam to the tip of the point (or from the tip to the baseline). Here I use a flexible steel cable and an alligator clip to get the length. Then the cable is stretched against a measuring tape to get the measurement.

Abnormal points? This buck does indeed have an abnormal point. Look at the photo of Jeff holding his buck. On the buck’s right antler, look at the third tine. There is a point branching off it. That makes it a non-typical or abnormal point. But which point is the normal one and which is the branch? In order to determine that, you have to decide where the baselines are for each point. If both tines came off the main beams, but shared some antler material, they would be a special case called “common base points”. However, in this case, one point branches off the other and does not arise from the main beam. If you take a look at the photo of Jeff holding his buck again, you can see that the tine that arcs back toward the second tine is the one that branches off the normal third tine. Abnormal points are measured very similarly to normal points. The difference is that the baseline of the point may not be on the main beam. In this case the baseline is drawn where the abnormal point intersects the normal 3rd tine. The measurements for abnormal points are placed a special section in the upper right-hand side of the scoresheet. The total of all abnormal points is added into a non-typical score, but subtracted from a typical buck.

Legal points? On Jeff’s buck, notice the small point coming off the top of the main beam near the end of the left beam. Is is a legal point? In order to be a legal, measurable point, it must be at least an inch long and wider than it is long. In this case, that point does not meet the definition of a legal point and therefore is not measured. 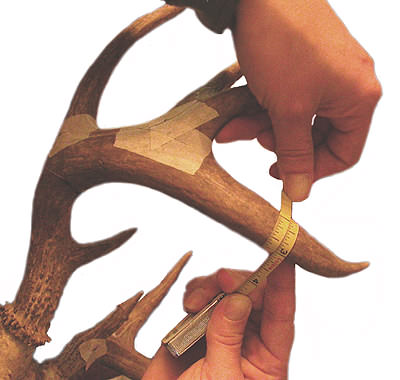 The inside spread measurement is the taken at a right angle to the centerline of the skull at the widest point. Using a carpenter’s rule makes this measurement easier to take. The ruler should be touching the center of the main beams on each side, unless one antler is significantly higher than the other. 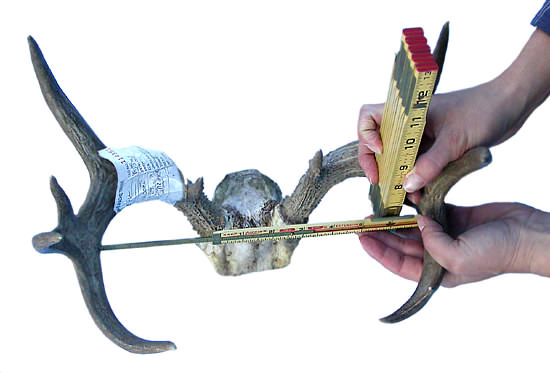 Use of a carpenter’s rule to measure the greatest inside spread. You can see the extendible brass section of the ruler on the left hand side of the photo. Note that the measurement is taken at a right angle to the centerline of the skull. In this photo, the differing lengths of the main beams makes it look the measurement is skewed, but note the position of the ruler in relation to the skull plate.

Tip-to-tip and Greatest Outside Spread

There are other measurements that go onto the B&C scoresheet, but they do not influence the score of the animal. They are used to help distinguish one rack from another.

The tip-to-tip spread is simply taken by stretching the tape between the center of each tip of the end of the main beam. This does not have to be at a right angle to anything. So if one beam is higher than the other, it makes no difference.

The greatest outside spread is one that is generally taken by laying the rack down at a right angle to a wall and marking the widest point, whether the that is the main beam or a point. 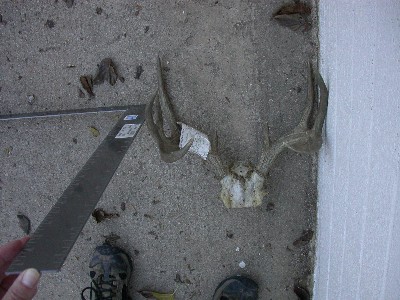 Here I am taking the greatest outside spread measurement. The ruler on the left helps locate the proper outside edge. Note that in this case, the greatest outside spread is widest where the third points bow out. To take this measurement, I would mark where the straightedge is hitting the concrete and then measure the distance to the wall, making sure it is at a right angle to the wall. You can use the special type of ruler shown here to determine the right angle.