Home / Hunt Stories / It’s all about who you know

It’s all about who you know

by Tate Hyslip (and Dad)

My adventure started as my Dad following the advice of Garth Carter, decided to put me in for the 2003 draw for Arizona’s 36B late Coues hunt. After actually drawing this coveted tag and researching the potential, Garth became first of several making my list of “who to know”.

Although the hunt wasn’t until December, there was much to do and learn. Neither my Dad or I knew much about hunting this challenging Whitetail subspecies, nor had we ever ventured into that part of the State, much less that particular unit. After reading and researching several different resources, it became apparent that to truly give ourselves the best opportunity to score on a big Coues we would need to scout extensively. This presented a problem as my Dad’s work load is heaviest in the Fall months, yet we hoped we could pull away when the time came. We also realized the need for some “serious” optics. The Coues and the country dictate the use of good long distance glass, tripods, and hours upon hours of determined, strategic glassing. This presented a problem because at 16 years old with only a modest part time income, quality big glass seemed an impossible dream. In fact for Dad, who has a modest FULL TIME income, thoughts of 15x Swarovski or 30x Docters faded as the checkbook balance collided with the monthly bills.

As the time neared it became clear that we were not going to be able to scout at all as Dad’s work load and schedule was unrelenting. Furthermore, finances had not improved and consequently neither had our optic arsenal. Then, things began to come together out of the blue. My boss Brad Desaye, an avid big game hunter and owner of a large wholesale gun and ammunition distribution company was excited to hear about my tag. Brad insisted that I use his personal customized 257 Weatherby and started coaching me on everything about shooting, even taking off of work to take me to the range. Brad definitely makes my list of “who to know”. Next, my uncle Bryon Goswick, a professional elk and mule deer guide, had finished out his last elk hunt early and offered his services and the use of his “Big Eyes” optics securely placing him on my “who to know” list. Then Chad Smith another guide, made my list of “who to know” by providing some key information such as ranch access , productive basins, and excellent glassing points based on his intimate knowledge of the area. Everything was coming together and I was excited.

Before long the season had arrived with just a couple of other hurdles to get over. I needed to get time off from work, and from school. My home school teacher “Mom” a “who to know gal”, graciously gave me the time off. My dream employer Brad, not only gave me the time off, but sent me out the door with not only his rifle, but also his 10x Swarovskis. I was feeling like a “Make a Wish” kid and I wasn’t even sick!

Dad was able to get the time off, so off we sent with a volunteer guide, borrowed rifle, borrowed optics, my brothers quad, and my other brothers camo. It seems all that I brought that was mine was the tag. Chad’s directions were perfect and before long we were glassing some incredible country and immediately spotting Coues. AS sundown was nearing Bryon had spotted what looked to be a nice buck in a place where he could be staked. But, before we could even develop a plan, a string of illegal immigrants appeared out of nowhere on their trek to a better life, spooking the buck out of sight and trashing any hope of getting back on him. After some discussion as to why we probably shouldn’t shoot the sojourners or the “Coyote” leading them (just kidding), we made our way back to the quads in the dark.

The next morning found us high on a peak, freezing, glassing, and hoping to spot another nice buck. After about 2 hours, several does and some small bucks, Bryon glassed what appeared to be a couple of nice bucks about 3 miles away. AFter studying the lay of the land and mentally marking the spot, we descended our glassing perch and made our way to a high point about a mile from where the bucks were last seen. Another couple of hours glassing found only more does and more small bucks. The early morning start, the warmth of the sun, and the hours of tedious glassing combined inducing me to recline among the boulders and daydream. My daydreams were suddenly interrupted by Dad saying “Hey, get your stuff let’s go!” While I was taking my siesta, Bryon had found the bigger bucks and they were in a position they could be stalked about a mile away. Bryon stayed behind to keep an eye on the bucks and guided us as we worked our way into position. He had indicated that the smaller of the two was still visible and feeding but the bigger one had gone out of sight as we made our final approach. The last 10 yards were on our bellies picking our way through the cholla, finally cresting the ridge behind some brush. An opening in the bushes allowed a perfect window for the shot, and as we looked through the window we saw the smaller buck feeding and the bigger fellow just under 150 yards away bedded broadside and clueless that we were anywhere around. I got control of my breathing and all the Brad had been teaching me was cycling through my head. I didn’t see antlers, I didn’t see a deer, I seen a tiny speck on the shoulder of that buck. I was holding the crosshairs on that speck. When the crosshairs had steadied some, the 257 Weatherby roared and my first Coues buck was dead where he lay.

That evening we roughly scored him to be somewhere around 106″ gross. I called Brad while sitting in front of the campfire and shared with him the good news of how his investment in me had helped bring down my Coues. He seemed to be as excited as if he had shot it himself. Bryon, Dad, and Chad (after we called him) were equally jazzed. Sleep came easy that night, and as we left the next morning I knew I’d be back….I’m hooked.

Back home, the taxidermist officially scored my buck at 108 6/8 non-typical S.C. I. and offered to mount my trophy for free! Did I mention my Dad is also a professional taxidermist and without a doubt a “who to know” guy. (He also helped a little with this story)

As I reflect on this experience I realize how much of a gift this truly was, and I pray that I don’t for a moment take for granted the efforts put forth on my behalf by those mentioned and those not mentioned such as the individuals and organizations that work to protect our hunting heritage and future. This magnificent trophy and the memories are mine largely because I’m fortunate to know the right people.

Finally, I would not think of crediting anyone with anything beyond what my Heavenly Father has allowed and has blessed me with because of my relationship with His son, Jesus Christ. You know, in the end it IS all about who you know! 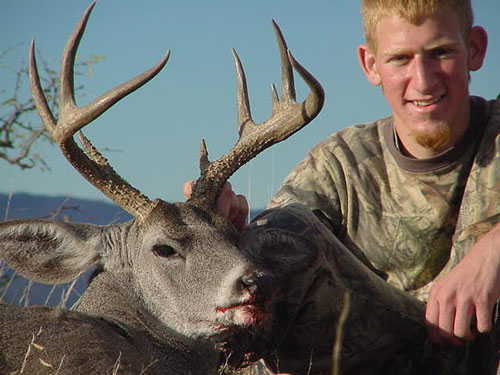 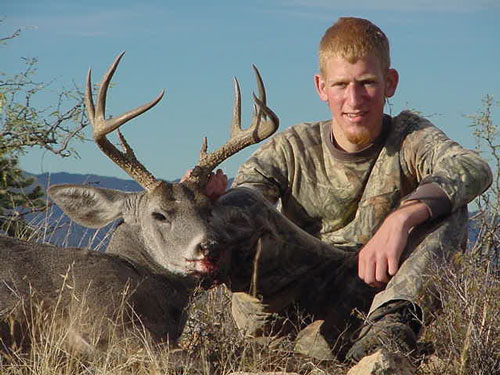