June 3, 2012 by CouesWhitetail in Rifle Gallery with 0 Comments

John killed this nice 4×4 with one shot from 320 yards.  He hunted every weekend of the season and passed on numerous smaller bucks.  I hunted quite a bit with John during the season and this is a really nice buck.  It is a very large bodied deer and had quite a bit a fat on it, which is remarkable considering the many drought years we have been having.

**update – I knew this buck was big bodied, but I just found out that it probably weighed 115-120 lbs. whole.  At the meat locker it weighed 79 lbs. and it had no head, legs, internal organs or skin on it! 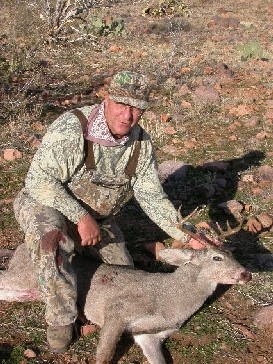