Here is the hunt story as relayed by Kristopher’s father Kent:

Well, I thought I would share a short story of the success we had on the Oct hunt in 34A. My son (Kristopher) and I glassed up this buck about 1000 yards away opening morning. We guessed him somewhere in the low 80’s and he decided he wanted to go after him. By the time we got over to him he had bedded in a thick area of mesquite trees. We got within about 200 yards of where we thought he was and got ready for him to eventually get up. After waiting about 30 minuets we decided to move a little closer and he jumped up and started to run. I was concerned that my son would have to make an off hand shot with the buck running so I whistled and the buck stopped to take a look, Kristopher must have been on him all along because the instant the buck stopped, he dropped him. Once we got over to the buck I was surprised to find the buck a little bigger that what I thought. Kristopher and I were really excited since it was his first Coues deer. He is entered in the big buck contest for the youth division and cannot wait to see who ends up on top! Not matter if he wins or not he will always have a great memory of his first Coues buck since it will be mounted on his bedroom wall. 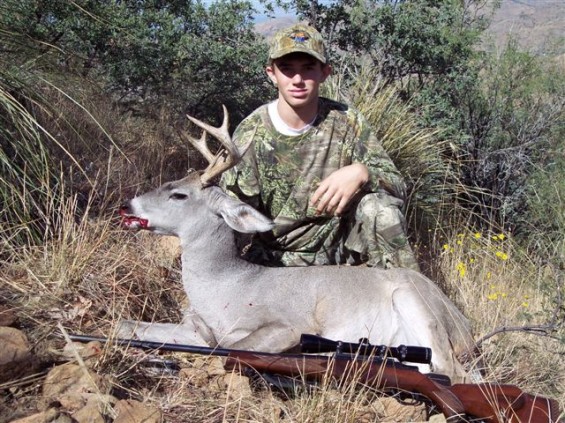