Matt Lewis gets his first deer

This is my first deer ever. I killed it on November 13, 2004. I was the only one who had a tag because my dad and his friend were not drawn for anything that whole season! We were hunting in 34B, in the Whettstones (in AZ), and it was the second day of the hunt. My dads hunting partner and I were glassing the mountain as the sun was just coming over the horizon. We didn’t see anything so we proceeded on with our hunting. Suddenly, I saw something out of the corner of my eye. “Oh my God, there thy are!” Five deer were kind of meandering up the mountain. I immediately dropped to my knees and looked through my binoculars, grasping my dad’s Ruger model 77 .243 in my hand. “I don’t see any antlers,” was what I told my dads friend Brian. But Brian had gotten out his spotting scope and said he might see and eruption. My heart started pounding, and I felt it in my temples. I then opened my bipod attached to the rifle and got the deer in my sight picture. “Okay, which one is it,” I said to Brian. he kept telling me his movements (since I couldn’t make out the antlers). The only time I saw the Buck was when he nosed up with a doe, and I just didn’t feel comfortable taking the shot. So I waited and tried to get him in my scope picture again. I never did see him and soon they disappeared over the mountain ridge. “Well” Brian said, “Should we go after them.” I said yes because I didn’t think we would see a buck very soon, because the previous day, we saw 22 does but none with any calcium. So we climbed up the hill, and I was sweating something awful. I had my heavy jacket on besides being in the sun. I also have asthma and having buck fever didn’t help my condition. We finally got to the top of the ridge and peered down. There were 3 does down about fifty yards down and they still weren’t very spooked. So we sat down to glass the little valley, and find the small buck (the whole stalk I never saw the antlers). I saw Brian looking down at another deer which was down in some heavy brush and figured it was a doe since he wasn’t saying anything. Then I realized that Brian wasn’t looking at that deer. He was looking at a closer one. I asked if it was a doe and he replied yes. I said that that must be the buck down there. Sure as heck, it was. He was walking towards a doe on the other side of a downed yucca that was bright orange. Since the buck was in the brush, Brian told me as soon as he went past the bush get him. When he emerged I asked Brian to confirm it was a buck. It was. Then of course when he said he was a buck, the little guy turned away from being broadside and had his butt facing us. The bipod wasn’t going to work, because it was too rocky. So I rested the piece on my knee. As soon as he turned a little bit I fired. I had missed opportunities before waiting for a perfect broadside shot and I wasn’t going to waste this one. He arched up his back and just started going around in half circles with his back legs planted. I asked if he needed another shot but Brian said he was down. He went down not five steps from where I had shot him. I was so happy that I had done my duty to the animal by killing it in one shot and I was happy that it was pretty close to the road. I used a rangefinder and found the shot was 172 yards. We took my kill back to the camp, victorious. 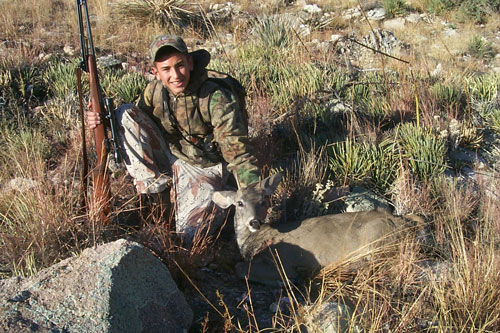