Don’t pinch me I want to keep dreaming. No wait it’s real. The 2006 2007 hunting season was under way and I was on my way to Colorado to chase mule deer with my muzzleloader. I also had a muzzleloader Coues deer tag for New Mexico, archery elk tag in New Mexico, Kansas rifle tag for whitetail, and a tag for another try at a monster Coues tag in old Mexico.

Five of us would be hunting a new ranch in Mexico this year. It turns out that our new ranch was fifteen minutes from where I hunt mule deer and had harvested a 32″ Muley a few years ago. Three of us made a weekend “scouting” trip in December. We hoped to get the lay of the land and if lady luck was smiling a shot at a monster Coues deer.

December found us glassing the desert floor. It was still hot and we were disappointed in the lack of deer and the size of deer that we saw. I went a whole day without seeing a deer. When we purchased the tags we were told that we would have to hunt hard but should hold out for a buck over 110. In our past hunting trips to Mexico we had hunted the oak and grass mountains were it was common to see 40 to 100 deer a day with a third of them being bucks. Needless to say we were very frustrated with our scouting trip.

We returned in mid January to try it again with the rut in full swing. Brent and Jason shot 100 and 105″ deer. I made a long shot on a great gold metal SCI Coues deer. His official SCI score is 108 7/8. 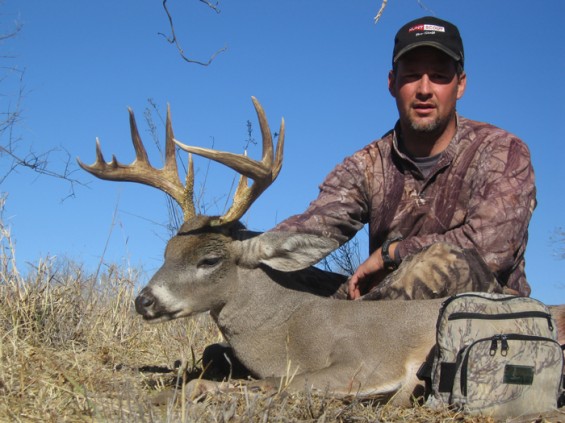 A great hunting season had come to an end, right? Except I have this problem. I promised my neighbor, best friend, and hunting partner Jr Lynch that I would return to Mexico with him as his schedule wouldn’t allow him to hunt this trip with us. I had previously scheduled to attend my daughters soccer tournament in Las Vegas with her the same weekend we were to start hunting. We compromised which left me driving five hours Sunday night, after my daughter won the championship game in her tournament, from Las Vegas to my home in Phoenix. I had left my truck in the garage ready to leave to Mexico. When I arrived home at 10:30 that night Jr and Jayson had stuff loaded in my truck. We dropped my daughter off at her moms. Jayson then drove us to the border while I got three hours of sleep. I drove from the border to the ranch in Mexico.

We drove straight to the base of the mountain, put on our camo and went up the mountain as fast as we could as it was already getting light. We glassed for about two hours but saw very few deer. We then took a siesta to read the inside of our eyelids. I awoke to the heat of the mid day sun and started glassing and what a site it was, Christmas in the desert!! There were deer running everywhere. Jr and Jayson woke up very quickly. Next., I found a buck that I told them that one of them had to kill if he came closer than 600 yards and that if he didn’t I would go back to the truck and try to stalk him when he bedded with my Knight muzzleloader. The big buck never came closer than 900 yards.

I hiked back to the truck to get my muzzleloader and some food for everyone as we hadn’t eaten since the evening before. After giving them some food I hiked off the mountain towards the deer. The plan was for me to sit at a water hole down wind from where he bedded and when he got up they would talk me into him.

About 3:00 in the afternoon deer, all bucks, started to come for water. The desert floor was so thick that Jr and Jayson couldn’t see the deer moving to and from the water. All of a sudden the big boy came in for a drink. I had a great rest and the knight muzzleloader made an easy 90 yard one shot kill. I was shooting the new power belt platinum bullets which I recovered, perfectly, mushroomed in the skin of the off side shoulder.

After the 60 day drying period my buck officially scores 114 5/8 SCI making him the new number two typical Coues with a muzzle loader. His score non-typical with long hunter will make him the number two non-typical in their book. Thanks to God and all of my friends, family, and the Hunt Scout Pro Staff. 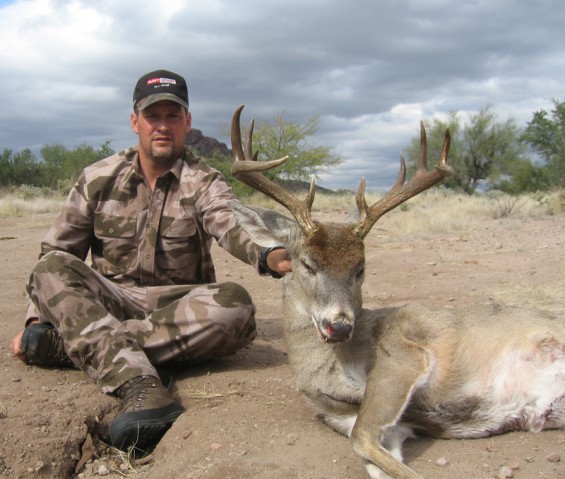 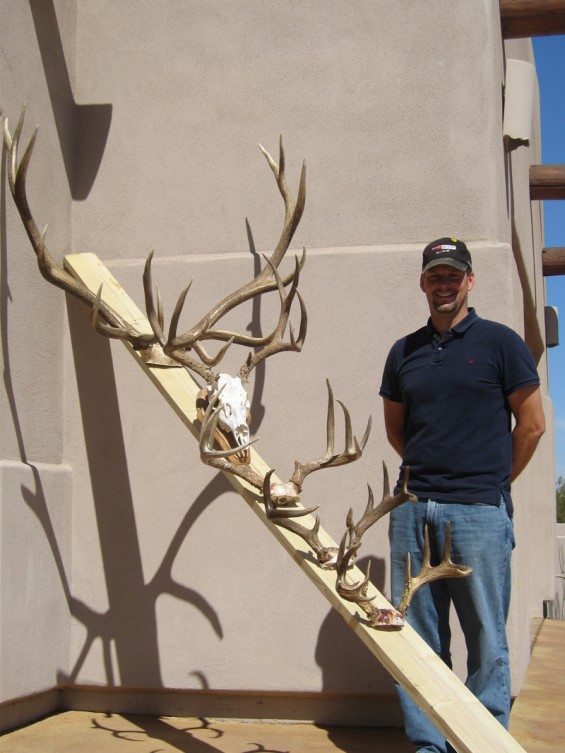 This photo shows the elk, mule deer, eastern whitetail and the two Coues bucks he got during the 06-07 hunting season. Wow! What a season!