I was 16 in December of 2002. My Dad, myself and my oldest brother, Justin, had been drawn for a coveted unit 22 coues whitetail rifle tag. Dad and Justin enjoyed hunting the first two weekends of the hunt seeing lots of deer and having the chance at a 108 inch type buck. I was unable to join them until the third and final weekend due to school and other prior commitments. To say I was excited as we began to glass early in the morning on the 26th of December would be a huge understatement.
We were in an area that in years past a friend of ours had hunted a buck that he swears would score in the 130’s. It was awesome country and we new we were going to see something good. Well, after 30 minutes or so Dad finally glassed up a buck. He was a smaller 2 point and he was moving fast towards the top of a ridge close to half a mile away. Dad jokingly asked if we wanted to go after him but Justin and I were already packing up our gear to head that way. Dad was saying things like, “he’s way out there” and “he’s moving fast, probably already topped over that ridge.”, but we didn’t care we were pumped and thought we could catch up to him.
Justin and I took off almost at a run as Dad finished putting his equipment away. As we paused to catch our breath we could see Dad coming up the trail so we let him catch up. We made good time and paused again to catch our breath before creeping over the ridge line and into the saddle to look for the small buck. We glassed for a bit but had no luck in finding him. We looked around at the country we were in and decided on our next move. There was another larger saddle about 150 yards to the northwest and beyond that a large bowl that looked promising.
We made our way to the saddle, crept below the ridge line, sat down in front of a big juniper, dropped our packs, and begin to set up the binos and tripods. As I strapped my binoculars to my tripod I scanned the bowl with my naked eye to get a feel for what we would be glassing. Something caught my eye. Movement. I remember thinking to myself, “there’s no way that could be a deer”. I swung my binos up to my eyes and in the direction of the movement and sure enough two coues deer were in my view. I steadied the binos. “I got some deer”, I whispered. “Where?” came the reply. “One is a buck….a good buck”, I offered. “WHERE??”, they really wanted to know now. I told them where to look. Two does and a nice buck. My dad asked if I was going to shoot him and I said of course I was. We ranged the buck at 450 yards. I got into a prone position and adjusted my elevation turret on my scope for the distance. Justin would spot and Dad would get the second shot. I settled the cross hairs on the bucks shoulder. I knew that if I missed, Dad would not, so I made sure I was rock steady. I let half my breath out, held it and began to squeeze until…BOOOMMM…WHOP! The 130 grain nosler ballistic tip from my .270 had found its mark. I racked another bullet into the chamber and got the buck back in my scope. Just as I did, his front legs gave out and he started to go down. “Put one more in him.”, Dad advised.  I had held my composure for the first shot but I had come unglued and was really shaking. I put the cross hairs on the downed buck and tried to hold them steady…BOOOMMM…WHOP! “That did it! He’s done.” Dad assured me.
Now the celebration began! We were guessing scores, planning what kind of mount,etc. This was by far a bigger buck than my first and we were pumped. The buck ended up being a real young buck, probably around three years old and scores right at 94 inches. My second coues buck was a very exciting, memorable hunt and perfect late Christmas present. 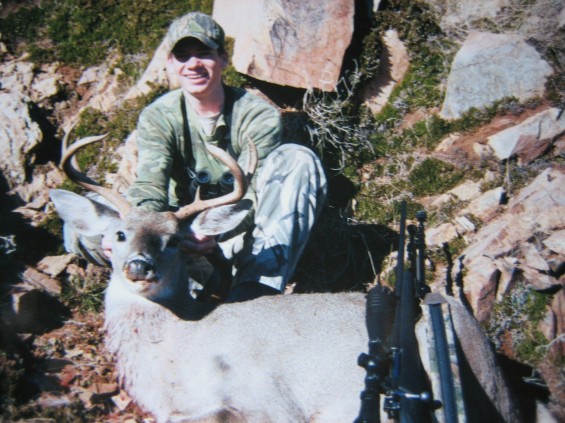