Hunting Coues deer over the years in my home state of Arizona has produced many bucks ranging from 80 to 109 B&C. I have always dreamed of breaking the minimum B&C mark of 110. As most serious Coues hunters know that true trophy Coues deer are hard to find and breaking the B&C minimum is no easy task.

Reading stories and seeing pictures of some of the deer being taken out of Mexico over the years has me wanting to go to Mexico and chase big Coues deer. In the summer of 2007 I received a call from good friend Steve Smith who had been helping guide and hunt on Enrique Zepeda Ranches over the years in Mexico. Steve explained that there were a couple tags available for Coues Deer in January 2008 if I was interested. Knowing of some of the big Coues that they have taken over the years I jumped at the opportunity. The opportunity to hunt with Steve made it even more special as he is one of the best Coues deer hunters in the sport.

When the day in Jan. 2008 finally arrived to make the drive down to Mexico I was beyond excited. The ranches we hunted had low coues deer density as it is on the far western edge of the historical coues habitat. The country was low scrub desert full of organ pipe and saguaro cactus. There are a few small hills holding the Coues deer. If you have hunted Coues deer you know how important it is to have good optics. We spent several days glassing behind our Swarovski 15×56’s seeing an average of 2-4 deer per day. We seen a couple of bucks during the week that would have scored over a 100 inches but we keep holding out for a buck that would make the 110 plus mark knowing the area has produced exceptional bucks over the years.

On the seventh morning of the hunt I was glassing on a knob overlooking a basin when I seen a doe on a ridge across from me out of the brush came a buck following her. When I seen the tine length and extra points he had I knew right away this was a book head. I took off across the basin and into the next canyon where he was to try to get a shot at him. When I came over the ridge he was standing in a draw with his does. I was able to get a quick rest on some rocks and make the easy 150-yard shot. The shot was true and the buck was down. When I walked up to the buck I was overwhelmed with excitement. I knew the buck was over 110 but I did not realize how big he truly was. The buck has 14 scoreable points and lots of character.

Chip McBroom who was in our camp hunting mule deer and is an official scorer for SCI, scored the buck at 138 3/8 SCI. He has been unofficially green scored at 132 net B&C non-typical which should put him in the top 35 bucks of all time. I want to thank God for allowing me to harvest a buck of this caliber, let alone see one. I also want to thank my friends and new friends I met on the hunt for all their help. Steve, Daryl, Chip, Enrique and Alex. 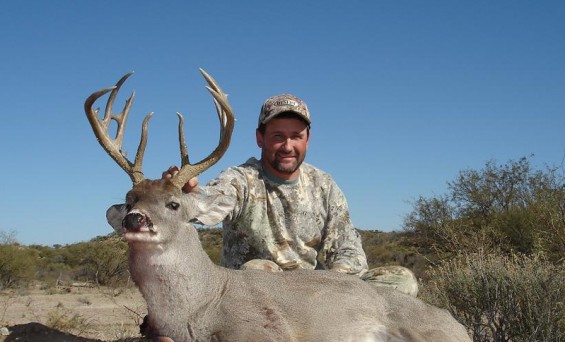 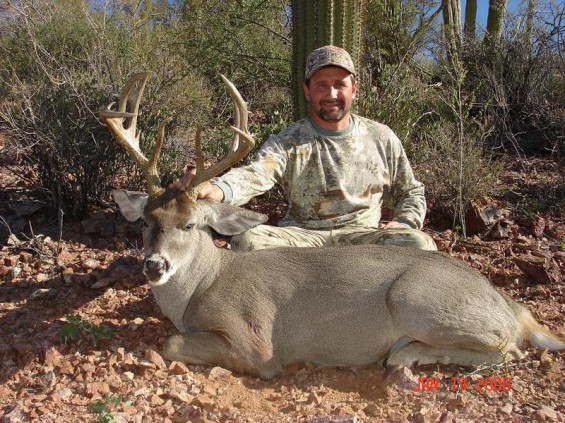 Dan won the Mexico Non-typical category in our CouesWhitetail.com contest for the 2007-2008 season. His prize was a custom coues deer bronze made by Jason Lewis, one of our forum members who goes by the name Foundryman. Here is a photo of that bronze. 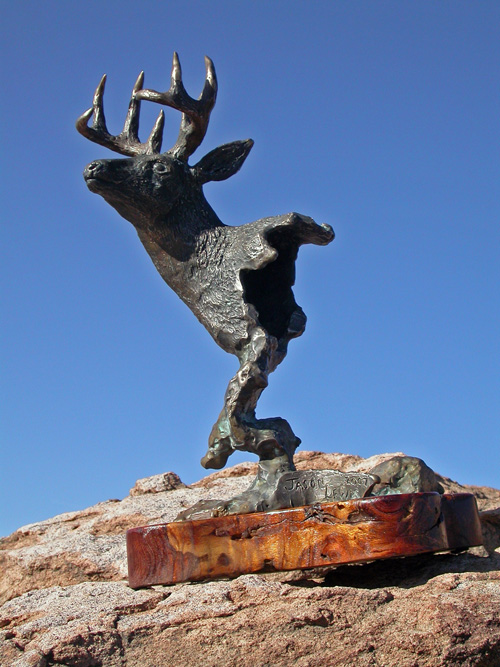