December 1, 2014 by clark31bennett in Hunt Stories, Rifle Gallery with 0 Comments

I’ve been hunting for deer a handful of times with my buddy Sy but never put in to try and draw my own tag. This year he talked me into putting in and assured me he would take me out to a great spot. Once I found out I was drawn I started asking on opinions for rifles, binos, packs, etc… making sure I was geared up.

The hunt finally came around and we headed out. Friday morning rolled around and we were hiking the hills and getting to our spot just as the sun came up. It didn’t take but 15 minutes for me to glass 2 deer flagging us about 2 hills over. I couldn’t see either one before they vanished. So much for being stealthy. We weren’t too worried because 2 weeks prior we came and scouted this spot and glassed 4 bucks within 30 mins. We knew they were in there.

About an hour later my buddy Sy says “I got one, I got one.” He glassed him at about 1000 yards! Deep spot. Only thing he saw was his ass shining in the sun. He’s been hunting for years and said this was his best glass – for as deep as it was. A few minutes pass and Sy finally says “He’s a buck! A nice buck, he’s wide!” Being so far out we couldn’t really tell how big but when the sun hit his rack you could tell he was worth the chase. We moved back and around to a closer point where we could get a better look and range a shot. We glassed him up easily. This time he was out for a full view. Broadside. Sy took his pack and laid it on a rock and I went belly down to take a shot. He ranged him @ 500 yards. Now, I had been to the range a handful of times making sure I was comfortable with my new rifle! And I was shooting – up to 300 yards. Sy guided me through the process of how high to aim. Low, low, low, high…JUST LOW…Amazingly he just stood there after 5 shots! But after the 5th he decided to go behind the same bush as before. Didn’t see him for about 10 minutes and Sy told me I need make a decision to move after him or stay and glass. Well, with adrenalin rushing I headed out! From where I shot I knew the marking points that we were marking him with and ‘thought’ I knew where to sneak up at. Once I dove off the hill and moved up the creek I came to a point where I knew I was close but wasn’t sure which spot I needed to move up at… A little frustrated and having the sense that I was close I decided to move up this hill. I was gassed from the hike and didn’t think to try and move over quietly. I got to the top and looked across (150 yards) and to my surprise saw him standing, stoved up and starring right at me. With no hesitation I took aim and put him down. I put my binos up and looked back at Sy… He was busy doing something else but came running to his binos and looked and threw his hands up and yelled ‘Hell ya!!!’ I hollered back and waited till he made the hike down. Turns out that 5th shot hit him in the lower gut and injured him. When I left to chase after him Sy said he came out and was laying down in the open – trying to bite at his hind leg – standing funny. Sure woulda been nice to have remembered those WALKIE TALKIES! Glad it worked out…

The rest is history and needless to say I’m hooked. Sy says I got spoiled. I enjoyed the entire hunt! Icing on the cake was tagging out and being back @ camp by 2pm Friday – just in time to hear UofA handle ASU! Can’t wait till next year. 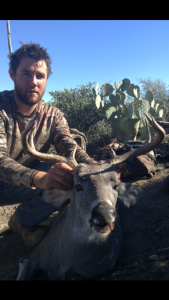 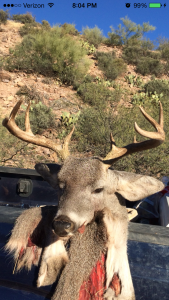