Robert was lucky enough to have his trail camera catch a photo of the buck he shot right before he shot it (top photo) and right after he shot it (middle photo).

Here is what Robert said about his hunt:

This is the buck I’ve been after since October, I have approximately 50-75 game camera pictures of him. Then in mid December he quit showing up, followed by stories of other hunters pounding the area and taking great bucks. I sat in my blind every weekend this month w/o sightings of him. Finally he came in yesterday and I had a rare opportunity to take him. The two daytime game camera photos are of him just before and just after the shot. He gross scores 107 1/8 inches and has double split brow tines. 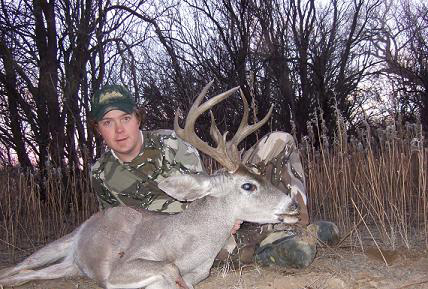