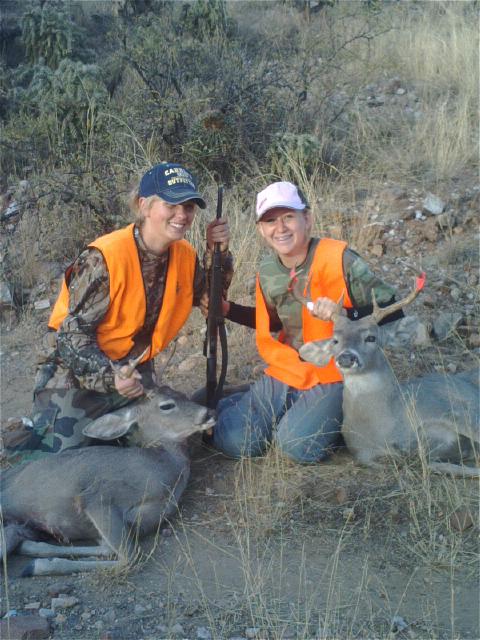 Here is a picture of my daughter Sarah and her friend Rebecca. Both girls are 14 years old and hunted the Juniors Any Antlered deer hunt in Unit 33 this year. Both girls harvested their bucks on opening morning about an hour apart. We had hunted this area the previous year and saw several bucks. The first three deer we saw were does. Daren spotted two bucks right beneath us at about 325 yrds. Both being pretty small bucks, we decided to stay where we were and continue glassing. I spotted a buck off to our left and watched it close to within about 190 yards. After glassing for a while we decided to head down hill to look for the two smaller bucks. We spotted three deer and watched them for about an hour to see if the one that was partially visible was a buck. Then after about an hour we found out that all the deer were does. Once again we saw more deer. One being a button buck. He was snoozin’ off and on and chewing his cud. We watched him, trying to decide if Sarah should take him or not. Just when she was getting positioned for the shot I spotted a deer bedded about 350 yrds, this one being even further away. All we could see was a big heavy body in the sun. The deer’s head was hidden by leaves and branches from a small tree. Finally I saw a large set of antlers move through the leaves. I directed Sarah to him and she repositioned for the shot. Sarah took her first shot and the buck ran toward us and stopped at about 300 yrds. She then took a second shot. This time we saw blood and the buck walked to a small tree and bedded down. We decided to get closer for final shot. Daren and Rebecca stayed on the buck with their binoculars while we crossed the canyon. Sarah took her closing shot at 90 yrds. While Sarah was taking her deer out, I spotted a buck right above us and called across the canyon for Daren and Rebecca. Rebecca took the buck after a short stalk with her dad at her side. He was a 3×2. Sarah and Rebecca were both very excited with their bucks. Sarah’s buck is a symmetrical 8 pointer that measured 86 5/8, and it’s her first deer. What a great hunt.