It all started back in July of 2005, when I found out that I did not draw any big game tags in my home state of Arizona. I also failed to draw any big game tags in a few bordering states either. Well, what was I to do? My friend Scott had been telling me of some nice Coues Whitetail bucks he had been seeing while scouting over the last few months, and since I had no other big game hunts to go on he thought I should pursue these bucks. Scott would not be hunting the area due to the fact that he had drawn a coveted mule deer tag in northern Arizona. Scott and I went up scouting a few times and after learning the area I was convinced to try my luck at bow hunting these very cautious deer. Of course this was one of my only chances at hunting big game for the rest of the year, and I do love to bow hunt so I was all for the challenge.

The first day of the hunt I chose to sit a tree stand and had several Coues does approach close to me but no bucks. I was amazed at how cautious and alert these deer really were and this reconfirmed my opinion on actually how difficult these animals would be to harvest with a bow. The next day was basically the same, a few does came near me and I was intrigued in watching their behavior and realized what a unique deer they were. Even though the weather was very hot, I still enjoyed watching these deer.

I returned in September for the hunt with my friends McKay and Preston. We each had different areas we were going to hunt and we would be spread out over a few mile area. I arrived at my hunting spot and got all set up in my tree stand. My confidence was high because when Scott and I were scouting we realized this location should be good, also another successful bow hunter had informed me of some of the deer he had seen in the area. After a few hours I spotted two bucks working their way towards me. Both bucks were nice three point Coues deer. The larger of the two bucks stayed back at around 50 yards, the other buck came nearer to approximately 37 yards. I was hoping in a few minutes the larger buck would join the smaller buck a little closer to me, but instead the smaller buck left and returned to feed with the larger buck at 50 yards or so.

While having a close encounter with these bucks and still watching these two bucks I noticed a few more bucks approaching. There were two nice bucks and one exceptional buck which stayed back at 60 yards. The two smaller bucks came in and joined the other original two bucks. I looked at the big buck as it was watching cautiously at 60 yards; I knew I had to wait for a chance at this huge buck, even though all the bucks were nice. Finally, after approximately 25 minutes of watching the other deer the big buck started walking closer to me, most likely thinking all was safe since the other deer failed to recognize any danger. As the big buck walked down the hill he walked behind a juniper tree and I drew my bow, as he came out from behind the tree I could see he was heading towards an area that I had ranged earlier at 30 yards.

When the big buck arrived near the area that I had ranged with my rangefinder earlier which was approximately 30 yards I squeezed my release, and my arrow was on its way. I saw the arrow hit behind the front shoulder and right away I said out loud “I can’t believe it, I just shot the biggest Couse deer I had ever seen!” I know it is best to stay quite, but I just could not believe that I had shot this big buck. I approached my buck and was amazed at how majestic and beautiful he really was. After retrieving my buck I loaded it up on my 4-wheeler and headed back towards McKay’s location which was just a few miles away and on the way back to camp.

I arrived at McKay’s hunt area and hiked over towards him, and McKay asked “did you get one?” And I replied “yes” and McKay asked “how big is it?” I replied “pretty big.” We then both headed over towards my buck, as we approached the buck I did not say anything as I wanted to see McKay’s expression. McKay looked at the buck and said, “Are you kidding me! Are you kidding me?” McKay and I headed back to camp, shortly after we arrived we decided to go and inform Preston of our success. We notified Preston and then returned back to camp. Preston (a real Coues deer enthusiast) looked at the buck and said “I can’t believe it you have just harvested my dream buck!”

My buck has been scored, and the paperwork sent off. The unofficial P & Y record book gross score was close to 121″ typical, but due to the unique characteristics and the lack of symmetry the net score plummeted to around 109″. I also had the buck scored in the SCI record book, the unofficial gross score was 120 6/8″ typical, and then they subtract 2% for being in the velvet which puts the SCI score at 118 3/8″. Regardless of the score I think this buck is one of the neatest Coues deer bucks I have ever seen.

What a hunt! In fact, a week after I shot my buck Preston harvested a nice three point buck as well. I was sure glad that Scott was able to spend a few days of the hunt with us and share his hunting knowledge, which was a great asset we really did appreciate his help. My eight year old son Hayden also spent one day of the hunt with us, which was a great time. I would also like to thank my wife for being so understanding, and realizing my need for going up in the hills quite frequently. And of course I would like to thank God for all the blessings and freedoms we have, and one of those being the opportunity to enjoy the outdoors! 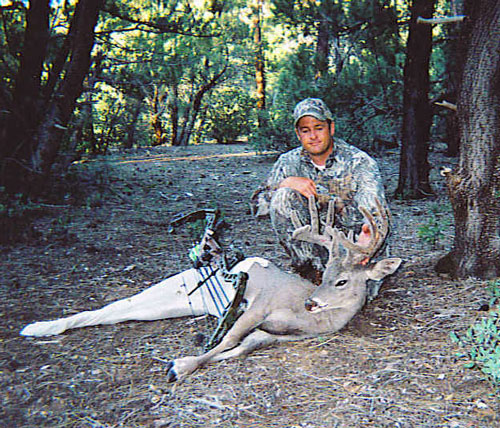 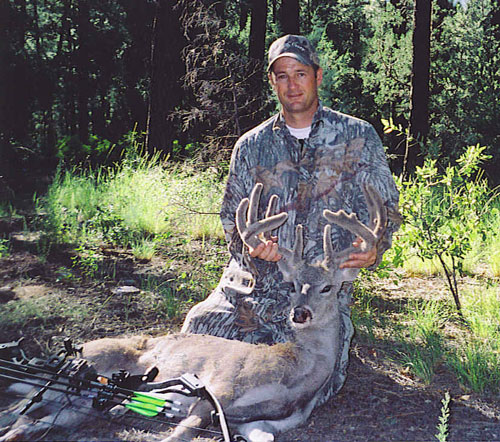