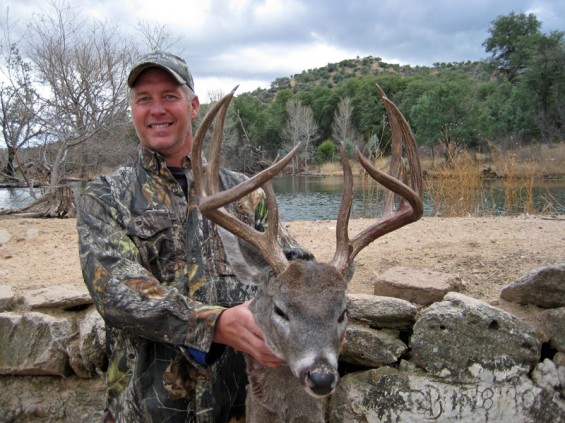 My name is Jay Jones. My friend, Clint Hill (who is an avid coueswhitetail.com fan/poster) told me there was some interest in a special Coues buck I was lucky enough to harvest this year.

Here are a few pics of my 142 gross Coues (unofficial). Below is a short story about taking the buck.

I feel very humbled and fortunate to have had the opportunity to harvest him with a 506 yard shot. Lots of respect for this old monarch. We estimate his age to be 6+ years old.

My hunting buddies/guides were Nick Forsythe and Ted Byfield. Ted spotted the buck over two miles away and announced excitedly, huge buck way up high in the bowl. This is the same bowl my hunting partners, Greg Lucero, Nick, Clint Hill and I spotted a huge buck two years ago and were thinking this must be the same one.

Ted and I drove over and climbed the back of the bowl. We crawled up a steep manzanita and shale face. Nick covered the front of the bowl in case the buck tried to slip out. Nick and I had climbed the same route up to the bowl the day before. When we reached the top yesterday it was covered with deer sign and we knew it was a worth the climb. We spotted several deer but not the one we were looking for.

This time, Ted and I arrived at the bowl crest at 1pm careful not to skyline and maneuvered into position to glass the dark north facing slope of the bowl. Within 10 minutes, amazingly Ted had spotted the buck bedded next two a feeding doe under a juniper. He quickly ranged the buck at 506 yards.

I extended the Harris bi-pods on my Weatherby .257 to shoot in a sitting position because the mountain grass was so high. I turned the elevation turrent to 500 yards on my Leupold VX-III Long Range Tactical 6.5×20 outfitted with a Leupold bullet drop compensating dial (highly recommended).

I settled the crosshairs on the buck and tried to concentrate on a smooth trigger pull. Seemed like I was squeezing way to long and hard when I realized the safety was on. Happens to the best of us I guess! Got ready again and got a good squeeze, this time with no safety on, sending the 115 nosler ballistic tip on its way. Ted advised, you hit him…but he’s up and moving.

Two hours later after some very anxious moments we had my buck of a couple lifetimes. Initial gross score is in the range of 142 and will probably net just south of 135 placing the buck somewhere in the range of top 5-10 all time typical Coues bucks ever taken.

It is hard to put in perspective a trophy like this buck. My ambitious goal for 30+ years of Coues deer hunting had been to get a buck exceeding the Boone & Crockett minimum of 110. I have several in the 100-110 range. Lots of good, very capable hunters never break through the 110 barrier. Obviously, I far exceeded my expectations. Again, I feel very, very lucky.

I can’t thank my hunting buddies Nick Forsythe, Ted Byfield, Greg Lucero and Clint Hill enough. They all played a major role in helping make this possible. I have learned much from them. We are childhood friends who come together every fall to continue our quest and passion for chasing these little gray ghosts around the Chiricahua and other mountains.

Greg was the first one in the B&C club. Larry Osborne joined Greg and now I finally broke through. Nick, Clint and our buddy Tim Gomez are next to join. You can be sure we’ll be there trying to help them make it happen every fall. 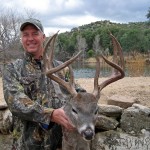 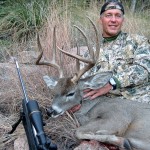 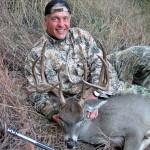 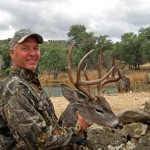