June 2, 2012 by CouesWhitetail in Hunt Stories with 2 Comments

In the beginning, there was a tiny drop of water. In that water were two tiny amoeba. The start of whitetail hunting was born…..I think that’s pretty much how all deer hunting obsessions began. I began hunting and fishing since age 4, since my father was a game warden for the state of Michigan. My mother also helped support my love for the outdoors. I started out really getting into archery deer about 12 years old when my father and stepdad would teach me travel patterns,and deer behavior. Hunting ethics was always instilled and stressed such as what angles and distances were acceptable. Through trial and error,I managed to successfully bag some decent animals along my travels.

My methods of deer hunting whether it be archery or rifle,are the same as most. I really enjoy treestand/blind hunting but my real passion is stalking/stillhunting.Michigan whitetails have the same behaviors as Arizona Coues. The travel patterns of going from bedding to feeding areas is the same…with one slightly larger factor,Coues whitetails tend to cover the thickest steepest terrain known to man. Manzanita thickets and scrub oaks are not the archery or rifleman’s friends in the high mountains. The terrain in which they survive such predators as mountain lions, bears, and smaller predators as coyotes and even bobcats is a maze. Deciphering the maze and sticking with what the basic needs are is essential. Food and water are still the top priority and eastern whitetails and Coues both seem to follow water. Rivers, springs, waterholes will produce deer anywhere. I used this knowledge to scout an area in Arizona and successfully pursue some very large Coues deer.

December 23rd I decided to take a breather from archery Mule deer in Unit 21 to hunt whitetails. I was bummed out from the previous days hunt. I had stillhunted up to a 25″ wide muley with heavy mass and long high tined rack. I drew back and released my arrow. I hadn’t noticed a small twig at about 30 yards out and my arrow deflected and stuck in the ground at his feet…After that fiasco I figured I would go with what I am comfortable with. I knew I had to get up where the snow belt was and soon found myself in a perfect mountain range and elevation I had never hunted before.

The area was teeming with ponderosa pines, oak trees overloaded with acorns and thick expanses of manzanita. I immediately began the task of finding travel patterns and water routes. I discovered a spring that forked off and at that junction were huge rubs and scrapes filled with alot of tracks. I began moving a little slower and with more purpose. About an hour later while stillhunting I caught some movement and 4 deer materialized from the manzanita and strolled into shooting range. Unaware of my presence, I drew back on a beautiful wide racked typical deer in the 100″ class. I misjudged the distance and my arrow zipped harmlessly over his shoulder into the rocks behind him. He swiveled toward the sound but seemed undaunted as the does started moving away from me. I knocked another arrow for a second shot but just could not make it happen. I continued on, and decided to return with reinforcements, my friend Roger Frost.

Roger is a successful hunter and I was wanting to get him hooked on whitetails with archery gear. We decide to set up stands on December 27th and Roger got the area where I missed the nice buck. I continued to scout and found a saddle where the deer were traveling between bedding and feeding areas. There were tracks following a spring in front of my stand about 100 yards out, it just seemed like the place to be. I set my stand in a juniper tree 8 feet off the ground…Roger chuckled as I set up. He was sure I needed to be higher. I knew my leafy camo suit and use of cover would prove to work. There were 4 runways converging as well as a secondary runway that paralleled the main ones, I knew the bucks would want that one…

December 28th, we were 7200 feet elevation, dealing with bitter 9 degree temperatures and no wind. The roads were very dangerous with ice and I decided to walk almost 3/4 mile to my stand. The sun was up already and I picked up the pace. I had just been on stand about 10 minutes when I noticed a hoof movement on my left. I gripped my bow a little tighter then saw brow tines! I knew he was a shooter and hooked the Trufire release onto the string. I didn’t have time to stand as he sauntered up the saddle, head lowering to clear low hanging oak branches. I drew my BowTech Patriot as he did this and as he stepped from under the tree, he stopped at 12 yards. I didn’t have time to process antlers, just focus on the shoulder..stay calm and pick a spot I thought…my pin was on and the release was good. I knew as he swirled around a cut a 90 degree turn he wasn’t going to go far. The Thunderhead 100 broadhead and GoldTip arrow were buried to the fletching…he collapsed 40 yards from my stand.

I hadn’t realized just how big he was until I grasped his antlers. When I noticed double drop tines and I was having a hard time fitting my hands around the bases, I began laughing out loud. I thanked the hunting Gods and tagged him immediately and then the rush of adrenaline hit…I dragged my deer to the road and was going to go to the truck…As I walked to the truck, I decided to let Roger keep hunting. I was almost back to my deer when a vehicle with mountain lion hunters pulled up. They offered me a ride to Roger’s truck and there I waited patiently until he came out of the woods. Roger had a fork horn 20 yards from his stand that morning..so I guess you could say we both had a successful day…This buck would later score 132″ gross and green net at 123 5/8″ making him #2 Pope and Young… since then Roger has seen more bucks and does from his stand, and I have seen and drawn back on 2 more 100″ bucks or better from that same stand. I think we will continue hunting our new honey hole… 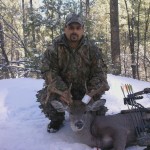 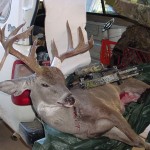 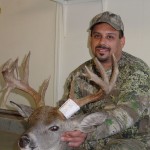 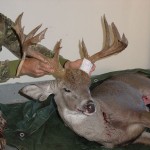