The opening morning of the 2008 coues deer season began with a fresh blanket of snow and that bone-chilling cold that freezes toes (though snuggled in the best insulated boots) and cuts through long johns and every layer of fleece.

My childhood friend, Brian Woods, had drawn an early deer tag for the 2008 deer season and he had invited me, along with his older brother Danny, to share in his opening day hunt. Since we were kids, Brian had always been one of those meticulous hunters who spent the preceding months out scouting as well as countless hours at the range in preparation for a 500 yard shot. But as we pulled-off the road that morning, little did we know that today would provide the highlight of Brian’s 25 years of dedication to this fine sport and a marvelous trophy of the elusive grey ghost.

The previous evening, Danny had glassed a few doe and while gloating that we “owed him a round,” for spotting the1st deer, the brothers simultaneously whispered “buck,” as two deer emerged from beneath the tree line and about 30 yards from the doe. Though we were roughly a mile away, they determined that is was well over 100”. “That’s a possible shooter” Danny said, “but it’s opening day so we have plenty of time!” Well it got dark rather quickly so we called it a night and decided that we would hike into the bowl early the next morning—set-up and hopefully catch a better glimpse of the two bucks. On the way home, Brian stressed that he wanted to be ready to glass before sunrise so we needed to be on-the-road by 4am.

The next morning was pitch black as we proceeded to hike about a mile through the snow and to the brother’s favorite “glassing spot.” (Their oldest brother Jimmy had taken a buck the year before that scored over 120”so they were convienced that there were some “good gentics” in the area.). This was indeed a spectacular vantage point where we could glass two separate ridges above our position, or simply look at eyelevel for a sweeping view of the entire valley.

By eleven we were all a bit apprehensive but excited as we had seen: Mule Deer, several herds of Elk, a few doe but of course—no bucks. Brian decided to hike over to the opposite ridge to get a different look at where we had seen the deer the previous evening. We were planning on meeting Brian at the truck, for lunch, around 12:45 but Danny decided that we should grab a couple of burritos and hike them over so that Brian could get in as much “glassing” as possible.

By the time we reached Brian it was around 1:45 and as we slowly advanced towards the GPS coordinates, we noticed that Brian was well camouflaged beneath a large Cedar tree. The terrain was very deceiving on this side of the mountain as Brain sat a mere 50 yards away from a steep canyon, which separated us from where we had seen the two bucks.

As Danny and I were taking-off our backpacks, Danny noticed some movement on the top of the opposite ridge. He immediately sat down and used his field glasses to reveal the two bucks that we had seen the previous evening. “Oh yea bro, that’s a WHOPPER!” he exclaimed. Of course we were all excited and as I fumbled for my binoculars, the look on Brian’s face spoke volumes. I literally saw his jaw drop, his eyes widen and his fists clinch, and as I focused on the buck, I immediately understood his reaction—I can only describe the sight as exhilarating—that unique lump in your throat which suddenly appears when you hear a patriotic song or happen to witness a brilliant sunrise.

Thankfully we hadn’t spooked the deer so as Brian calmly collected his thoughts and began loading his rifle, Danny quickly and quietly set-up his tripod. Danny whispered for me to “stay focused” and to “keep your eye on the buck”—while he and Brian advanced towards the canyon to find a better vantage point.

You could feel the tension in the air as they stopped about every 10 feet to analyze their position. I continued to watch this deer in awe and I realized that though I had no idea what he would score, I knew that he was thick, had an enormous spread and was by far the biggest coues deer that I had ever seen through any binoculars.

Brian and Danny finally maneuvered themselves to within 300 yards of the deer and as Brian settled-in for the shot—time simply froze—until the stillness of the day was broken by the crashing echo of the 25-06 rifle blast. I watched as Brian centered his first shot directly in the “sweet spot,” just behind the shoulder, sending the buck leaping into the air and then he immediately came crashing down and landed directly into the nearby brush. We all sat there for a moment, each replaying the past few seconds in our minds—enjoying that special silence—void of everything but your own subconscious and the utter magnificence and wonder of mother nature.

Brian and Danny decided that I would man the optics while they hiked over the edge of the canyon; cross the river and hike up to where the deer dropped. After about fifty minutes, I saw the boys nearing the thicket of trees where the deer had fallen and so I radioed that they were “right on top of him.”

Now maybe I’m biased here, for the Wood’s family introduced me to hunting some 20 years ago during my first Javalina hunt. But as I watched them wade through the brush and come face-to-face with the deer, I witness an incredible sight—the kind of raw emotions that gets filmed when you have no idea a camera is present, or perhaps the unexplainable feeling of a kind act without reward.

I saw two brothers embrace in a way which only the admiration of something truly appreciated and earned is expressed. For there are those who find nothing but fault with this passion we share for hunting and no matter how ethical, just and compassionate we approach this passion, they will never get the opportunity to experience what we all felt that special day. Here were two men who shared a deep-seated admiration for nature, and a respect for that delicate balance of life which transcends mere rankings and record books. In short, everything which makes them true ambassadors for this unique sport

When I finally caught-up with Brian & Danny, I quickly shared in their excitement as lying before us was a magnificent 5×7 coues deer with a cool looking cheater on the left side. The deer was much bigger then we originally thought and it ended-up grossing 122 7/8”.

In the true spirit of family, which is so ubiquitous to this unique pastime, no less then fifty people came by Brian’s house that night. There were: neighbors, friends, relatives and more then twenty children, of various ages, waiting to take pictures with the deer. They had all come to share in the same blessings—to see this majestic animal; to listen to Brian’s story and to toast to his success. 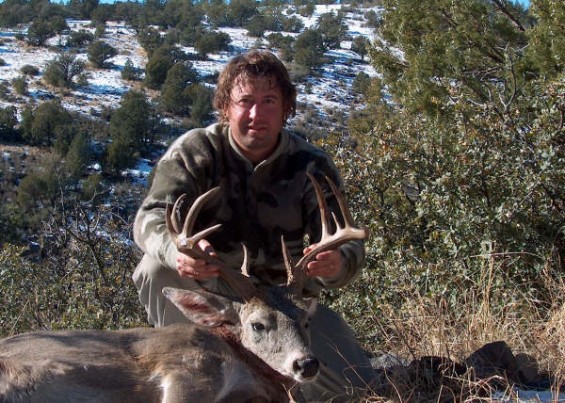 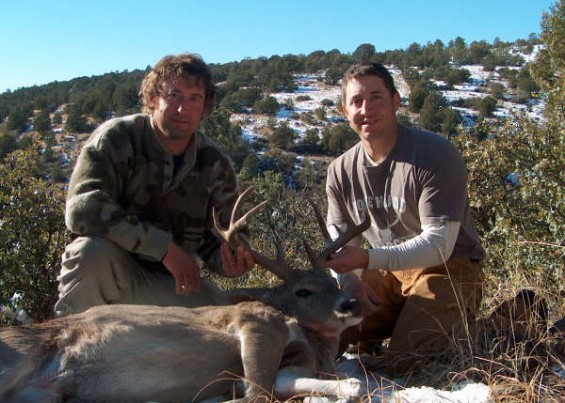 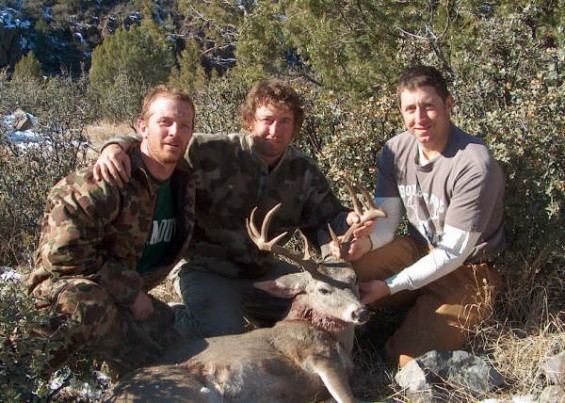