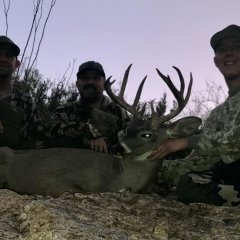 I hope we didn't spoil him

By lionhunter, December 4, 2009 in Rifle hunting for Coues Deer