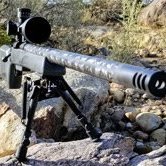 Huntin Coues with a .250 Savage