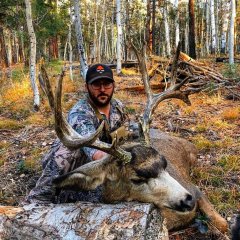 The First of Many

By Camofreak, September 12, 2018 in Bowhunting for Coues Deer