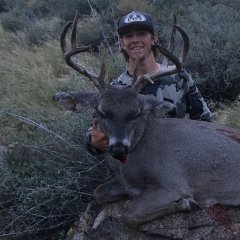 A hunt i will never forget!

By Coues_Freak, November 15, 2015 in Rifle hunting for Coues Deer